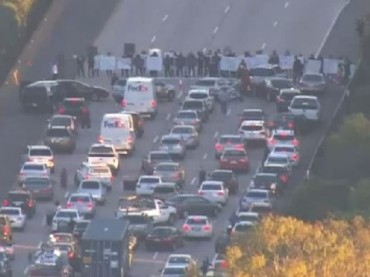 The protest against the Ferguson decision included roughly 40 people – most of whom are UCSD students. Some held signs such as “Hands up, don’t shoot.” Others used a bullhorn to yell at the already irritated motorists snarled in traffic along the northbound I-5 near campus.

“I am really enraged,” UC San Diego student and Black Student Coalition Chair Jazzalyn Livingston told NBC San Diego. “People of color, students of color, often times we don’t have a voice. This is our way to demand that ya’ll listen.”

But the protest didn’t appear to create empathy for their cause among the thousands of drivers stuck in the gridlock.

“The frustration was apparent as drivers got out of their vehicles and began taking images and video of those holding up traffic,” NBC San Diego reports. “Some took the red cones put up in front of the line of protesters and threw them to the side of the highway. One man appeared to be screaming and threatening several protesters including one holding a bullhorn. He then wrangled the bullhorn away.”

Roughly 40 minutes into the protest, police finally got the demonstrators off the freeway, yet did not arrest or cite anyone, U-T San Diego reports.

“When police finally arrived to escort the students off of the freeway, the protesters complied and marched off peacefully while continuing their chants,” the UCSD Guardian student newspaper reports. “The police continued to closely monitor the protesters as they marched on surface streets, which attracted a blend of supportive fists and dissenting middle fingers from drivers passing by.”

Comments under articles about the blockade and among San Diego social media posters were mostly seriously annoyed with the students.

“I wish people would focus on the evidence rather than the black and white of it… So proof he attacked Wilson in his car and proof he was charging Wilson in the end. Can you idiots get off the freeway now?” declared one San Diego resident on Facebook.

Many commenters also called the protest dumb and reckless. UCSD is surrounded by several hospitals and medical centers.

Others got a little blunt with their thoughts, with one Marine posting: “Run them over.”

This is the second such freeway blockage in San Diego in as many days. On Monday night, people upset with the Ferguson decision also blocked  Interstate 15 at University Avenue, NBC San Diego reports.