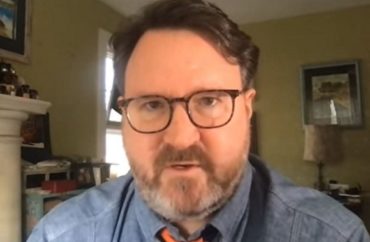 The first time Aaron Kindsvatter, a professor of counseling at the University of Vermont, heard the term “whiteness,” it was “when a faculty member offered to help me with it, like it was some kind of disease.”

Fast-forward to today, and Kindsvatter has had enough.

He posted a video March 8 titled “Racism and the Secular Religion at the University of Vermont” in which he suggests his employers are close to if not outright in violation of Title VI of the Civil Rights Act of 1964, which prohibits work-based discrimination on the basis of race.

It's time for me to talk publicly about what's happening at the University of Vermont tps://youtu.be/f_PyTwXPre8

Kindsvatter is no stranger to speaking out against progressive policies at the University of Vermont. In 2016, he openly and heavily criticized the school’s bias response team for its overreaching powers. In 2019, he pushed back against its equity and diversity mandates. But those efforts were largely campus-centric.

Now he has taken his conscientious objections to the masses in his YouTube video, perhaps in an ode to Jodi Shaw. Shaw recently made national headlines for her series of videos that exposed the anti-white work environment at Smith College.

Similar to Shaw, Kindsvatter calmly and rationally makes the argument in his video that antiracism efforts in effect amount to racism against white people solely based on the color of their skin.

“The thinking that informs [whiteness] is so crude and so lacking in falsifiability and it speaks so eloquently to our tribal impulses that the same logic that informs what’s currently being called whiteness now can easily find its way to desperate persons who need a group to hate and who will adopt the suppositions that inform whiteness towards their own ends,” Kindsvatter said.

(Watch his video; the professor placed the age-restriction setting on it, not YouTube)

Kindsvatter cited specifics to build his case that the narrative on campus labels white people en masse as the problem.

For one, he cited an ongoing teach-in series on whiteness being hosted by the university’s diversity, equity and inclusion division. The series argues that several “vague social ills are associated in a causal way with people of a particular race,” he said.

Kindsvatter also cited the call among his peers for a “ceremony that ritualizes our program’s commitment to antiracism.”

“If this policy is passed,” Kindsvatter said, “in speaking up against what many would consider to be an antiracist teaching, but is one that makes a causal connection between people of a particular race and vaguely defined societal ills, I would be considered … racist.”

He ended his video with calling on the University of Vermont to “stop reducing my person to a racial category in your teach ins.”

He added: “Please stop telling me my views are harmful just because they’re more moderate than yours are. We all share the same values, we all want the same thing for our university and our society — it doesn’t mean that we all have to think the same way.”