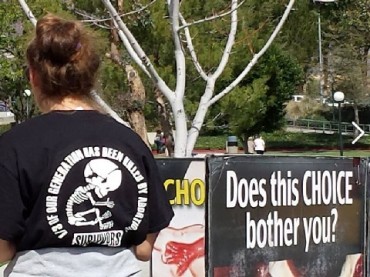 Yesterday, The College Fix reported on a story about a department of feminist studies professor at UC Santa Barbara accused of going berserk after coming across a campus prolife demonstration that used extremely graphic displays, leading a small mob of students to chant “take down the sign” before taking one of the signs along with two of her students, then allegedly engaging in an altercation with a 16-year-old prolife protestor who had followed the educator to retrieve it.

Today, video of the latter portion of the incident has been made public by the prolife group who represents the demonstrator in the video.