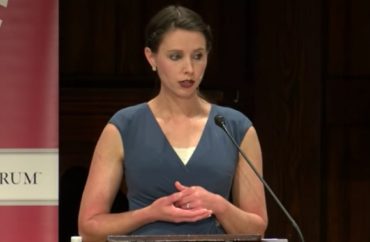 One of the arguments against the God of Christianity goes something like this: How can a loving God also be one of vengeance and wrath?

Ask that of Rachael Denhollander, who was sexually abused by Michigan State University sports medicine doctor Larry Nassar and was the first victim to come forward publicly about him, and she might respond: How can a loving God not also be one of justice?

“Would a God that saw evil and did not care be trustworthy? Would he be loving?”

Denhollander made those comments as part of a recent speech at Harvard University given on behalf of the Veritas Forum exploring the topic of justice and forgiveness. The forum hosts a variety of conversations on college campuses nationwide on the intersection of Christianity and a variety of disciplines.

“Very often the idea of God punishing, and wrath, is seen as something negative and vengeful. But what I want you to understand tonight is that punishment for evil — justice — does not happen because God doesn’t love, but because he does,” she said.

“When my innocence was stolen as a young child and again as a young teen, God saw that damage, and said this is evil, and it matters. He said that before a jury said it, before my abuser was convicted, before societal response turned in my favor,” she said. “God saw it first.”

“And that bringing of justice is a demonstration of his love. God promises justice because he knows, even more than I, how horrific the damage from abuse is.”

Denhollander set up her comments by establishing evil as a moral absolute.

“C.S. Lewis perhaps said it best in his book ‘Mere Christianity,’ a quote that has become central to me throughout this process: ‘My argument against God was that the universe seemed so cruel and unjust. But how had I got this idea of just and unjust? A man does not call a line crooked unless he has some idea of a straight line. What was I comparing this universe with when I called it unjust?'”

Denhollander went on to say that Lewis explains how the Judeo-Christian God defines what is straight to allow a recognition for what is crooked. He is a moral lawgiver who has set an objective standard of good and evil.

“Healing does not mean you become the way you were before you were wounded, because the scars are there,” she continued. “… And knowing that the straight line exists allows me to grieve that damage and to not have to minimize it, downplay it or ignore it.”

To reconcile justice and forgiveness, she said, it’s important to note her forgiveness is not dependent on nor connected to the justice that should be meted out against an evil abuser.

“Forgiveness,” she said, “my giving up of my personal resentment and vengeance does not change the external permanent standard of right and wrong and justice that is set by God. Because I can trust that God will bring justice … I am free to release my personal retaliation … personal bitterness and vengeance, and I do not have to sacrifice justice to do it.”

Denhollander acknowledged the apparent tension between justice and forgiveness in scripture, saying they are both held out as good things. But they can and are reconciled, she added.

“The Christian faith adds to justice through an additional measure of incredible love — God offering to take that justice upon himself in sacrifice for us,” she said. “The Christian faith teaches that God’s love does require justice because evil is real and damage matters. … But it also teaches that God in his love and mercy gave himself to allow the justice that evildoers should receive to be poured out on him instead.”