LA CROSSE, Wisc. — Attempting to be racially colorblind is the “epitome” of white privilege, according to a panel discussion held at Viterbo University on Tuesday night.

“Saying that you’re colorblind, or that you are race blind, or you just see people for people and not whatever color they are is the epitome of white privilege,” said Alyssa Gostonczik, the intern and employer relations coordinator at Viterbo and one of the panelists at the 90-minute event.

“It means that you are denying hundreds of years of oppression to a group and then expecting them to be on the same level as you are, or saying things like, ‘Well, you can do anything, you just need to try harder,’ or ‘Pull yourself up by your bootstraps, you got this,’ when that individual is not even close to being on the same playing field as their white counterpart is,” Gostonczik said.

“As long as good people keep doing nothing, racism is going to continue,” she added. 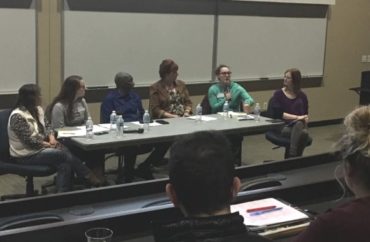 During the panel, called “Unpacking the Invisible Knapsack,” the six participants traded stories about how they have personally experienced white privilege in their lives. (The “Invisible Knapsack” refers to a term coined by feminist Wellesley Professor Peggy McIntosh to describe the tools of “unconscious oppression” whites carry with them at all times.)

Yet while the panel was primarily focused on white privilege, Gostonczik quickly moved on to other types of privilege enjoyed by more fortunate citizens.

She argued “socioeconomic privilege” allows wealthy people access to health care, education, and the ability to take an unpaid internship to better one’s job prospects. If one has socioeconomic privilege, Gostonczik said, their parents likely went to college, meaning they are also expected to do so.

Gostonczik also mentioned those with “Christian privilege,” meaning holidays you celebrate are always recognized, you get days off from work and school, the decorations around campus and town fit your holidays, and you get to hear Christmas music playing in stores and on the radio. Christian privilege means politicians likely share your faith and your views – “anti-abortion laws, for example.”

When discussing “male privilege,” Gostonczik said she had recently heard a story on NPR about how NASA had to cancel an all-female spacewalk because there weren’t enough space suits to fit female astronauts.

Male privilege, she said, means you are “likely compensated for the work that you’re doing.”

Yet Gostonczik said one of her favorite privileges to talk about is “‘heterosexual cisgendered privilege,’ which means if you are not on the LGBTQQIAP spectrum, you’re privileged.”

She noted that “if you don’t know what the letters in that acronym mean, you’re privileged.”

Listen to a portion of the panel here:

Viterbo University, a small private school situated in Western Wisconsin, is a Catholic school originally founded in 1890 by the Franciscan Sisters of Perpetual Adoration. Men were denied entry to the school until 1970. Even in 2019, the undergraduate population is made up of 488 males and 1,387 females.

When panelist Mary Anna Thornton was asked whether racism and white privilege are the same thing, she said she believed they were “closely related terms.”

“I think we white people, speaking from my white identity, struggle with these words – ‘racism,’ and ‘white privilege,’ because they are abstract terms to us. We don’t understand them through our lived experiences.”

Other panelists supplied personal experiences to back up the existence of white privilege.
For instance, Viterbo Assistant Professor Michelle Pinzl said she has a very close male black Cuban friend who she spends a lot of time with. Pinzl said she recently took a trip to Austin, Minnesota, with her black friend and she said she got a text from another friend that said, “I see you’re leaving the state, are you okay?”

“Why would you ask that question?” she asked the crowd. Later, she said, the friend who sent her the text told her it was a joke, but it was “coincidental that I happened to be in the car with a black man who is much bigger than me.” She said she has been at the grocery store with the man and colleagues have called other colleagues to ask if she was okay.

Gostonczik said an incident just 20 minutes before the presentation made her reflect upon her white privilege. She said she noticed some kids had hopped a fence into the trash can area outside her office window, and she sat at her desk contemplating whether she should call security not knowing what the racial makeup of those children was. She suggested if she called security on the kids and they were black, either there could be violence or it could ruin their lives.

“Based on the behavior of the children,” she said, she ended up calling security and “it turned out fine.”

“It was something I thought about before calling, and I definitely know that is a privilege that white people have,” she said.

Gostonczik mentioned the fact that Band-Aids, tights, makeup and nail polish all assume white skin is the norm is an example of white privilege.

Pinzl explained institutional racism can be found in the way law enforcement handles people with limited English proficiency. As an instructor in language interpretation, she believes people under investigation or at the scene of crime often can’t speak English, so confessions may be coerced.

“If you are a person who speaks English proficiently, and you’re pulled over, you get to tell your side of the story,” she said, noting there is almost never an interpreter on the scene to gather facts. She said she sees this as an example of institutional racism.

Pinzl said every year she contemplates having her students engage in a “white privilege walk,” a practice that has gained popularity in academia over the past few years.

“It’s a walk where we take a step forward if we have privilege and we take a step back if we haven’t,” Pinzl explained. The students who are furthest ahead at the end of the exercise are then forced to reflect upon their privilege.

“It’s incredibly good for the white folks,” Pinzl said. “But I really worry how good it is for the non-white folks.”

Following the panel discussion, Bryce Dorff, a postgraduate student in language interpretation, told The College Fix that such discussions were necessary at the university.

“As homo sapiens evolved over time and began to spread, you started to collect groups of similar individuals, whether it be beliefs, or skin color, or language, and eventually that led in to communities and organizations and cultures, and we’re now in a world that’s so interconnected I think our perspective needs to shift away from our evolutionary roots in terms of ‘Oh, who looks like me’ to different perspectives of unity and group,” said Dorff, whose undergraduate degree is in environmental science.

“So I think holding different discussions like this are important because it helps us break down those barriers that prevent us from really bonding and creating relationships in seeing past the differences.”

In an interview with The Fix following the presentation, Gostonczik repeated her insistence that colorblindness is for the privileged, saying that the idea of privilege must be taught to young children.

“We want our children to be smarter than we are,” Gostonczik told The Fix, “so we need to recognize when to step in and say, ‘Hey, I didn’t learn this as a kid, I know it now as an adult, you need to be learning it now, so when you get to be an adult you’re not making those same mistakes I made as a teenager, as a young adult.

“By starting with children at a young age, you’re getting at that idea of ‘How we can make it better?’”

At the beginning of the presentation, each of the panelists began by announcing their names and their preferred pronouns. The audience was then shown a YouTube video called “White Privilege Glasses,” which depicts a white man wearing 3-D spectacles that show him all the things people of color see in the world. The overwhelmingly white audience was made up of about 60 people.

“Hopefully by talking to other white individuals that are ready to have this discussion and are ready to better themselves, that collectively white people can be better white people,” Gostonczik concluded.