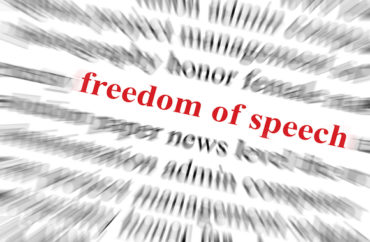 A College Republican at Stanford University is criticizing a recently created administrative role at the school that will assess the “academic merit” of campus speakers, claiming that the position is “Orwellian” and infantilizing of students there.

The Associated Students of Stanford University recently created a “Director of Academic Freedom” position for their organization. According to their website, the Director of Academic Freedom is expected to “work with University administration to revise policies and expectations for student group events that will ensure free exchange of ideas while continuing to uphold the Honor Code and Fundamental Standard”

The position will also “identify potential threats to student research, such as changes to federal funding of studies and fellowships that focus on controversial topics, and develop advocacy efforts around those issues as appropriate” and “partner with schools, departments, academic units, student organizations, and/or other stakeholders to identify potential speakers and confirm their academic merit.”

In a phone interview, Eykamp told The College Fix that he believes Stanford will use this role to censor conservative speakers, and in doing so, deny leftist protestors any chance to respond in embarrassing ways. In this way, Eykamp argued, the university would simultaneously achieve two separate wins for left-wing causes: Conservatives would be prevented from expressing themselves, and consequently, radicals on the left would have fewer opportunities to protest in distasteful ways.

Rather than creating extra speech codes that may target certain groups, Eykamp believes free speech on campus should be “similar to how it works in the general public,” and that additional speech codes are inherently unnecessary. He says the university should allow its students to make their own decisions, rather than constraining them with new policies that regulate certain speech and activities.

“Almost all of us are adults,” Eykamp said. “Why not treat us like adults?”

In an interview with the campus newspaper The Stanford Daily, Zintis Inde, the Associated Students’ first Director of Academic Freedom, suggested that the student government is hoping to alter the campus’s speech codes, claiming that the association is hoping to “work in a proactive way to examine and refine free speech policies on campus to reflect the current climate and our values as a community” and “proactively establish policies and guidelines” in order to “ensure a healthy culture of free speech on campus.”

The president of the Associated Students, Shanta Katipamula, told The Daily that the student government “cannot limit a student group’s access to funds based on the content of their speech — that has been the view of the last several ASSU leadership groups, and it’s one that we share.”

Katipamula also says the Director of Academic Freedom will not have the power to prevent any speaker from coming to campus.

Student government spokesman Josh Nkoy initially responded to The Fix via Facebook Message and said he would direct Inde to contact The Fix. Neither Nkoy nor Inde contacted The Fix after that, in spite of multiple followup emails.

The College Fix also sent multiple emails to Stanford University’s media relations department as well, but they failed to respond.