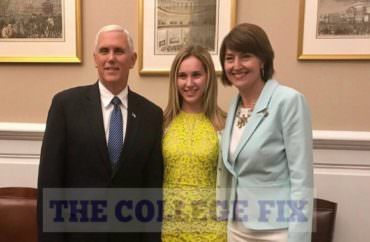 A Scripps College student who posted a picture of herself alongside Vice President Mike Pence and Republican Congresswoman Cathy McMorris Rodgers faced an aggressive and vulgar barrage of online bullying from peers over the post.

McKenzie Deutsch, an incoming junior at the private women’s college in Southern California, had shared the image at the tail end of her internship with McMorris Rodgers. She posted it without expressing political comment, as her Facebook connections include followers with a wide variety of political beliefs.

“Instead, I shared my excitement and gratitude for the opportunity to intern for Rodgers—the highest ranking Republican woman in Congress—and to interact with such impactful and important people in my job,”  Deutsch wrote in a column for the Claremont Independent.

After she shared the photo on her Facebook page she was swiftly denounced by peers who called her names and likened the image to support for oppression of women, the LGBTQ community and people of color, she reports.

“I began receiving vicious comments and private messages accusing me of not caring about LGBTQ rights and attacking me for getting anywhere near the Vice-President. Close friends and distant acquaintances alike lashed out in fury, subjecting me to lectures, rants, and name-calling—all while ignoring the photo’s plainly apolitical context,” Deutsch wrote.

“One person accused me of ‘ignoring the plights of marginalized people to achieve personal gain,’ saying I was a person who ‘smiled with [their] oppressors.’ Some took to mockery, inquiring, ‘Did you manage to ask him why he thinks women are second-class citizens?’ and ‘How many LBGTQ folks do you need to help send to conversion therapy in exchange for reproductive rights from Pence?’ A friend asked me why I would stand next to someone who is ‘a threat to human rights everywhere.’ A classmate simply commented, ‘Bitch.’ Many others ‘liked’ these comments, endorsing this shameless harassment,” she wrote.

Scripps College is the same one at which its student president last year alerted campus police after “#trump2016” was found scrawled on a dorm room door, calling it “racist … violence.”

And in February of this year, a campus flier hung at Scripps College advised students of color to charge their white peers for “emotional labor” inflicted upon them — referring to the effort exerted when a student of color corrects or educates a white student in some manner.

In 2015, Scripps began offering its female student body eight different gender pronoun options from which to select, expecting professors and others on campus to use the choices.

Deutsch, in her column, concludes by lamenting the current state of affairs on campus today, asking: “How did we get to the point where taking a photo with someone is an act of violence? How will we ever be able to have adult conversations if no one is ever willing to listen to those who have opposing philosophies? How can we coexist when we write off our political opponents—as well as those who dare to take photos with them—as morally bankrupt?”

Read the full column in the Claremont Independent.

IMAGE: Submitted to The College Fix