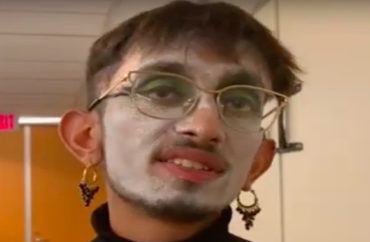 A quintet of Yale performance artists staged a protest outside of a Global Affairs professor’s seminar on Tuesday to denounce her “war crimes.”

The five students, according to the Yale Daily News, are part of a campaign dubbed “Do You Trust Your Educator?” which is part of a “larger project” called Paradise Sought. They attempted to enter Emma Sky’s “Middle East Politics” class to hand out pamphlets to attendees which call Sky a “pawn [in] imperialism and technocracy.”

When the protesters were prevented from entering, they “chanted, sang, stomped and yelled through the classroom’s windows” and laid down in front of the class entrance. The chants included “Open your eyes, open your ears, you are being taught by those you should fear.”

According to her Yale faculty page, Sky served as an advisor to the Commanding General of US Forces in Iraq, and to the Commander of NATO’s International Security Assistance Force in Afghanistan.

Protest participant Casey Odesser said the group’s “project” wasn’t “meant to be disruptive” — she claims they merely planned to “’perform a slinky, sexy catwalk’ into the classroom and silently place a pamphlet on each of the students’ desks.”

Odesser added she believes Sky’s students aren’t familiar with the “hypocrisy and violence […] propagated by her class” such as white feminism.

[Odesser] added that she was “sad [but] not surprised that” only one student — who was not a member of Sky’s seminar — asked the group for a pamphlet. No students from the seminar took a pamphlet from the protesters on their way out of the classroom.

“We want to show an alternative world here … through our art and our protest,” Odesser said. “You don’t really know the consequences of what you’re studying when you get here. And if I had known what this place represented in the world I would have gone through my time here very differently.” …

“Yale is committed to free expression and there are guidelines that establish the community’s expectations on how that is exercised,” [Dean of Student Affairs Camille] Lizarribar wrote in an email to the News. “The Undergraduate Regulations specify that students may be subject to disciplinary action if they participate in ‘any effort to prevent or disrupt a class.’ For example, students may hand out pamphlets outside the classroom, but they may not disrupt the class itself or create safety issues.”

The safety issues Lizarribar mentioned included fire hazards created by the protesters. As the class was ending, the group laid on the ground in front of both the classroom doors and the stairwell in an attempt to distribute their pamphlets.

Odesser said she was miffed at the administration’s rejection of her group’s plan to “honestly, earnestly and creatively engage” with Sky’s students.

“I’m appalled and horrified at how no one will talk to us engage with us and instead perceive us as a threat,” she said.