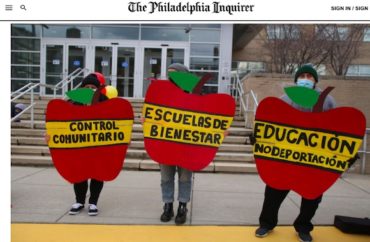 An immigrant rights organization says Philadelphia must commit to “sanctuary schools” so (illegal) immigrant students and families can “feel safe.”

The City of Brotherly Love already is a “sanctuary city,” and the city school district has in place rules and regulations forbidding staff to divulge student information to Immigration and Customs Enforcement (ICE).

However, the group Juntos claims “most” school personnel aren’t even aware of those rules.

Last Monday, about 50 people gathered outside of the school district’s central office to hear to Juntos (Spanish for “Together”) call for sanctuary schools, The Philadelphia Inquirer reports.

According to its website, Juntos is “a community-led, Latinx immigrant organization in South Philadelphia fighting for […] human rights as workers, parents, youth, and immigrants.”

Juntos Executive Director Erika Guadalupe Nunez, a “a queer immigrant, artist, and cultural organizer,” said her group’s efforts are “a call for freedom from criminalization, reinvestment in education, culturally responsive teaching, community control of schools, and schools to be places of healing.”

Nunez’s comments appear to come directly from Juntos’ sanctuary school demands. Not noted by The Inquirer regarding “culturally responsive teaching” is Juntos’ demand for curriculum “about our true history [which] develops our young people to be critical of white, ableist, and imperialist norms.”

A Juntos survey of city teachers and administrators showed that three-quarters received no training regarding ICE matters and “did not know who to notify” if ICE made an inquiry about a student. (The full survey report is here.)

At the sanctuary schools event outside district headquarters, children held up signs that read, “I want to go back to a safe school,” calling out against ICE and for the removal of police and metal detectors.

“Police-free schools, ICE-free schools,” Cierra Freeman, vice president of the Philadelphia Home and School Council, said to those gathered at Monday’s news conference, “in action, as they are in name.”

The cry was amplified by some politicians and labor leaders.

“I stand united with our undocumented neighbors in denouncing the terror perpetrated by ICE,” City Councilmember Kendra Brooks told the crowd.

“Schools should be places of sanctuary. Every child should feel safe and welcomed, welcomed with open arms in their school building,” said Hillary Linardopoulos, political liaison of the Philadelphia Federation of Teachers. “ICE has no place in our schools.”

Juntos also advocates for defunding police departments and freeing all (illegal) immigrants detained by ICE — in the name of protection from COVID-19.