Officials at Arizona State University recently removed a poster from a campus counseling center after a student group complained it shows a woman in blackface.

The poster, from the”WOMEN” collection by noted photographer Annie Leibovitz, portrays a white woman “covered in a paste of dark-brown, with hands painted red and words written on her face and body such as ‘wife,’ ‘daughter,’ ‘courage,’ and ‘hope,'” according to the Phoenix New Times.

The series was shot for a book published in 2000 which includes pics of “powerful women” like Hillary Clinton and features essays by the likes of Susan Sontag. 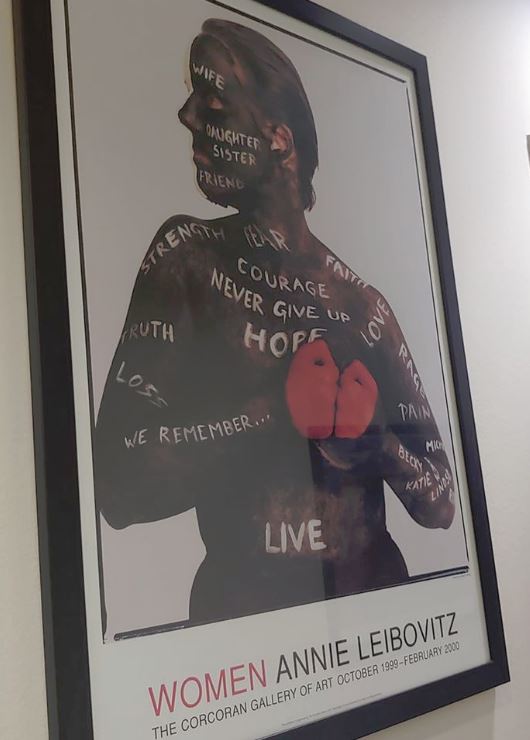 In a Facebook post, the MSC complained the poster was just the latest in a litany of offenses committed by ASU Counseling:

They are incapable of helping students with trauma they only teach coping skills.

While you do have the option of preferance [sic] of gender of the counselor, you do not have the same for race.

Many students of color come in due to the microagressions [sic] they experience daily & the stress of being at a predominantly white campus and are given white counselors who are unable to help & make the situation awkward due to the counselor’s own uneasiness with their whiteness.

Queer folks have come in asking for specific counselors who can help them with queer related struggles and told that everyone can help them.

“On top of this,” the rant continues, “Black students have to walk past the Black face in the counseling office!”

As might be expected, the school’s removal of the poster wasn’t enough. ASU Black Graduate Student Association President Zahara Teacola said the Coalition was “disappointed” the counseling center took down the poster … sans apology.

“Rather than acknowledge or apologize for the harm the offensive photograph caused the black students, ASU quietly removed the image,” Teacola whined, adding that there needs to be an acknowledgement that “students felt uncomfortable and bullied by a blackface photo.”

“The fact that you are even investigating this is racist,” the MSC told him. “Racism is not about what [Leibovitz’s] intention was, racism is the impact to black students.

“You as a white person do not get to determine whether something is racist. If you want to investigate something investigate what a microaggression is because your [sic] whole article you are writing is one.”

You can catch more of the MSC’s grievances via its November 22 “press conference.”

ASU told the New Times that the Leibovitz piece “had context in a larger collection of images that were selected by a large, diverse group many years ago. We understand that some people could interpret the image differently and when concerns from students surfaced, we responded.”