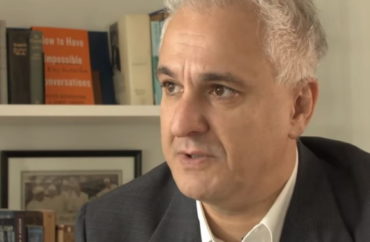 Some “anti-racist” students at Utah State University are protesting an upcoming guest appearance by Portland State University philosopher Peter Boghossian, saying his presence on campus will make them feel unsafe.

Boghossian has teamed up with Christian apologist Corey Miller for a series of speaking events at four Utah campuses this month dubbed “How Social Justice & Identity Politics are Negatively Impacting Culture & the University.”

Boghossian, a prominent atheist author, was involved in a project a couple years ago writing hoax papers and submitting them to peer-reviewed journals to reveal how fields like gender and race studies are “based less upon finding truth and more upon attending to social grievances.”

He co-authored “The Conceptual Penis as a Social Construct,” which was published in Cogent Social Sciences and blamed the phallic for causing climate change and raping empty spaces through “manspreading.” Other papers included a woke version of “Mein Kampf” with “fashionable buzzwords switched in” accepted by a feminist journal, as well as a paper discovering “rape culture” in dog parks.

His involvement in this effort has drawn the ire of the Utah State University Anti-Racist Solidarity Group, which penned a letter to Utah State President Noelle Cockett that calls on administration to “prioritize student well-being and academic integrity” when considering future events. The letter was posted to Facebook by the USU Black Student Union:

We understand and appreciate the opportunity to have thinkers and philosophers from all spheres of thought at USU. However, Dr. Boghossian has a history of unethical practices in academia specifically. While he is an established scholar and university professor, he actively rallies against cultural relativism and social justice in academia and has committed infractions at his home university that specifically targeted gender studies, queer theory, critical race theory, intersectional feminism, and the fat acceptance movement.

“How Social Justice & Identity Politics are Negatively Impacting Culture & the University” promotes logical fascism and anti-identity politics. Identity politics is a concept from critical race theory and gender studies that is central to creating a safe environment for Native American students and LGBTQ+ students respectively both of which groups specifically have a long history of persecution in this state. …

Providing him space for this event undermines the work the multicultural and minority student leadership groups and administrative bodies do everyday to promote diversity, inclusion, and safety of underrepresented students at this University. The implications and impact of this event is unprecedented and we do not condone it taking place at our University. We do not feel supported in our efforts towards student wellness, and we do not feel safe. Our hope is that the University will consider and prioritize student well-being and academic integrity for future forums.

Responding on Twitter, Boghossian noted: “Much of what they claim is true, e.g., I am against cultural relativism. Then there’s ‘we do not feel safe’ & ‘promotes logical fascism.'”

This letter of “concern” about my upcoming events in Utah is interesting.

Much of what they claim is true, e.g., I am against cultural relativism. Then there’s “we do not feel safe” & “promotes logical fascism”. https://t.co/jJ8VVJym7K pic.twitter.com/FCnTSpI93J

Miller also weighed in on the controversy on Facebook.

“[F]orces are obviously opposing our event that is advocating viewpoint diversity at the university, the most important kind of diversity for a university. Ironically, they hope to silence our free speech about free speech and thought,” Miller wrote.

The event at Utah State is scheduled for Feb. 6 in the Eccles Conference Center Auditorium.

MORE: Who’s afraid of a Christian and atheist joining forces? Answer might surprise you.