Senator Marsha Blackburn remembers the 1960s. The Tennessee Republican was a wide-eyed child watching the “bold statements and brash behavior” of college students on “once-sleepy college campuses,” who set the standard for a “modern day political protest.”

A Supreme Court battle resulted when a college president refused to recognize a chapter of Students for a Democratic Society in the name of preventing a “disruptive influence on campus,” as Blackburn said in Senate floor remarks Wednesday. But “nervousness is not an exception to the First Amendment.”

That was the context for Blackburn’s introduction of a Senate resolution against “free speech zones and restrictive speech codes” on public university campuses. It’s a companion to a House resolution introduced in March by Blackburn’s Tennessee colleague, Rep. Phil Roe.

In a press release Wednesday, she called the resolution – introduced on the eve of National Higher Education Day – “a first step in restoring sanity to free speech for American college students.”

Colleges must affirm that “freedom of speech is worth protecting in a world increasingly hostile to democracy” and ditch their policies that limit protected speech to tiny zones on campus or regulate it in the name of student feelings, Blackburn said.

In her floor remarks, the senator reminds her colleagues that the Supreme Court ruled in favor of SDS all those years ago, declaring the First Amendment “applies in full force” to public universities. 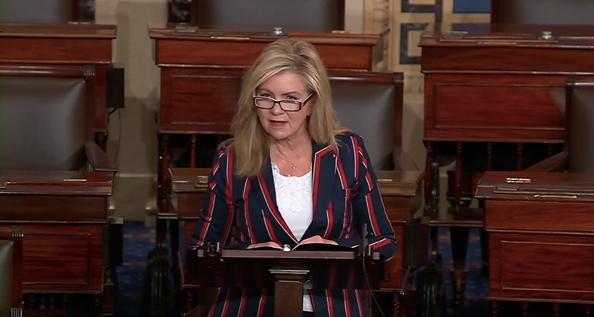 And though “precedent continues to trend in the right direction,” campus officials are using restrictive codes and zones to shield students “from anything that may challenge their preexisting notions of right and wrong.” Blackburn said the result is actually “an atmosphere of fear [and] violence toward opposing viewpoints.”

She cited a smoke-bomb attack against a pro-life event at the University of Texas-Austin and a Wellesley College student newspaper editorial that explicitly threatened “hostility” against anyone who “refuse[s] to adapt their beliefs” to ever-shifting notions of progressive propriety. (The editorial was prompted by fainting-couch feminists who denounced Wellesley for allowing a sex-positive feminist professor to speaking.)

Blackburn is incredulous that the editorial actually identified “beliefs – their beliefs! Not just their words” – as grounds for hostility. The resolution asks the secretary of education to “promote policies that encourage intellectual curiosity, viewpoint diversity and debate,” and the attorney general to “defend and protect the First Amendment.”

Universities need to stop “surrender[ing] to activists who value their own comfort over the free exchange of ideas,” and it’s a “moral inversion” for Congress to stand idly by as this happens, she said:

Free speech is in danger on our nation’s college campuses. Today I introduced a resolution urging universities to protect the free and open exchange of ideas. Read more: https://t.co/3D9ayvYvfM pic.twitter.com/KYqEAAKIPK

Though the Senate text isn’t up yet, the House resolution recites a litany of legal precedents, First Amendment advocacy federal and state laws, and censorship incidents against college students to make its case against restrictive codes and zones.

It mentions just one incident of students, as opposed to administrators, shutting down speech: the Middlebury College attack on social scientist Charles Murray, where protesters sent a professor to the hospital with injuries.

DeVos said students should “never face limits on what, when, where, or how they learn,” particularly when they disagree with ideas: “Learning is nothing if not a pursuit of truth.” Speech First President Nicki Neily said the resolution pushes back against the narrowing “window of acceptable political discourse on campus,” reflected by the threat of “burdensome administrative proceedings” against students who “express views outside” campus orthodoxy.

Joe Cohn, legislative and policy director for the Foundation for Individual Rights in Education, said free speech zones contradict their nomenclature: “[T]hey quarantine student expression to designated areas that are often tiny and far out of sight.”