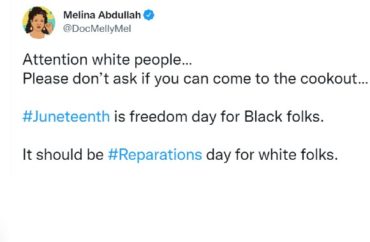 It should instead be a ‘reparations’ day for white people

White people should not ask Melina Abdullah if they can come to her Juneteenth cookout – she has already made up her mind.

“Attention white people… Please don’t ask if you can come to the cookout…” the California State University Los Angeles professor tweeted on Monday. “#Juneteenth is freedom day for Black folks. It should be #Reparations day for white folks,” the professor of Pan-African Studies told white people.

Juneteenth occurs on June 19, but it is a federal holiday on Monday, June 20. It commemorates the date, two and half years after President Abraham Lincoln’s Emancipation Proclamation, that Union troops in Galveston, Texas were informed that “the war had ended and that the enslaved were now free,” according to Juneteenth.com.

Attention white people…
Please don’t ask if you can come to the cookout…#Juneteenth is freedom day for Black folks.

It should be #Reparations day for white folks.

Congress and President Joe Biden made Juneteenth a federal holiday in 2021.

Abdullah has a history of sharing her thoughts on racial issues.

She called the trial of actor Jussie Smollett for faking hate crimes in Chicago a “white supremacist charade.” Abdullah, who advocates for an abolition of the police and prison, said in an ideal world Smollett would not have even gone to trial.

In an abolitionist society, this trial would not be taking place, and our communities would not have to fight and suffer to prove our worth. Instead, we find ourselves, once again, being forced to put our lives and our value in the hands of judges and juries operating in a system that is designed to oppress us, while continuing to face a corrupt and violent police department, which has proven time and again to have no respect for our lives.

Abdullah has criticized “white saviors” who “swoop in” to help black people. “It assumes that we don’t have our own solutions, our own plans, to disrupt white supremacy because white folks have lived in a world where they are really centered in the universe,” she told Mashable. “They think that every solution should be with them at the front of it.”

She also tried to get the Young Americans for Freedom group canceled on campus for a “Build the Wall” display.

She called the display “blatantly racist” and wanted CSU LA to “immediately revoke all permits for such programming and student groups that make such hateful work their core.”