Hearings are optional under bill headed for Gavin Newsom’s desk

One of the surprises in Title IX due process litigation has been the relative friendliness of California state courts to the rights of accused students.

One appeals court ordered the University of California-Santa Barbara to pay potentially hundreds of thousands of dollars in attorney’s fees to an accused student for exposing its pattern of Title IX and due process violations that threatened all students.

Another said the University of Southern California wrongly denied an accused athlete a “meaningful opportunity to cross-examine critical witnesses at an in-person hearing.”

Both of these rulings are just from the past three months. Nearly two years ago, two rulings against USC were handed down less than a month apart, requiring the private university to let accused students cross-examine both accusers and witnesses.

Even the 9th U.S. Circuit Court of Appeals, based in San Francisco, got into the act last month by reinstating an accused student’s lawsuit against Arizona State for an alleged “pattern of gender-based decisionmaking against male respondents in sexual misconduct disciplinary proceedings.”

California lawmakers are evidently unhappy that they can’t solely blame the Trump administration’s Department of Education for forcing their colleges, public and private, to ensure basic fairness for accused students. (Remember the final Title IX regulation on sexual misconduct proceedings followed several court rulings – federal and state, trial and appellate level – that mandated many of the same provisions.)

The Assembly passed a bill Sunday thumbing its nose at federal and state court rulings on the rights of accused students, not to mention the new Title IX regulation. The Senate passed the bill Monday, sending it to Gov. Gavin Newsom’s desk. The vote tallies were 60-12 and 31-8.

SB-493 saw no action for more than a year, according to the bill history. It only cleared the final Assembly committee Aug. 20, a week after the Title IX regulation took effect and after a federal judge refused to halt its implementation.

It’s obvious California lawmakers were naively hoping federal judges would nullify the regulation despite legal trends over the past several years granting greater protections to accused students. Indeed, they hid the existence of opposition to the bill from the start.

The bill not only directly violates the Title IX regulation by banning cross-examination by a party’s advisor, but California state court rulings that require accused students be given a hearing.

Colleges have the power to decide “whether or not a hearing is necessary to determine whether any sexual violence more likely than not occurred” (the preponderance standard of evidence). 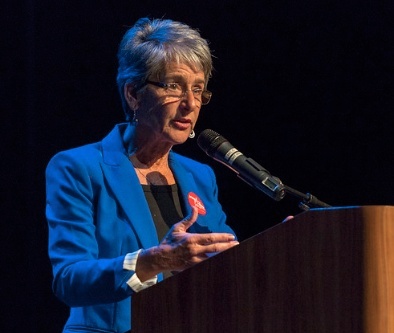 Not only does it delay implementation until 2022, with the “apparent hope” that the federal regulation won’t be around by then, but the bill fails to mention its hearing-optional provision directly violates the state’s own court rulings, he said.

Incredibly, the bill is sold on grounds it will provide greater "clarity."
Implementation date isn't until 2022 (w/apparent hope that regs will be gone by then). No mention of policy on giving schools a choice to hold a hearing at all as violating CA court decisions. pic.twitter.com/xTyZcX9DGU

Indeed, the fundamental problem with trauma-informed training is that it instructs investigators and adjudicators to view inconsistent and shifting explanations by accusers as evidence they were victimized. It has come under fire from not only neuroscience researchers and legal experts but also the Association of Title IX Administrators.

One due process advocate is skeptical that Gov. Newsom will seriously consider vetoing the bill.

Cynthia Garrett, co-president of Families Advocating for Campus Equality, tweeted that the conventional progressive Democrat is not in the mold of his eclectic predecessor, Jerry Brown, who vetoed another anti-due process bill in 2017.

We can appeal to the CA governor to veto as we did with CA SB-169, but @GavinNewsom is no @JerryBrownGov, who wisely evaluated the potential impacts of the bill. https://t.co/BNDy6BrcMg

Brown warned that “thoughtful legal minds have increasingly questioned whether federal and state actions to prevent and redress sexual harassment and assault – well-intentioned as they are – have also unintentionally resulted in some colleges’ failure to uphold due process for accused students. Depriving any student of higher education opportunities should not be done lightly, or out of fear of losing state or federal funding.”

California Governor Jerry B… by The College Fix