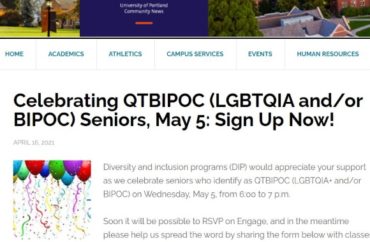 A Catholic university in Portland is hosting a graduation celebration that honors a whole lot of identities.

Indeed the only grads that don’t seem to make the cut are heterosexuals.

University of Portland’s diversity and inclusion division is hosting a “QTBIPOC (LGBTQIA and/or BIPOC)” graduation celebration on May 5.

The event is held in addition to its traditional, mainstream commencement.

Campus officials, in their announcement of the special event, lament the fact that they are combining all these identities into one big party, explaining they don’t have the logistical support for anything else:

We recognize that there may be some concerns as to why DIP is not hosting individualized graduation ceremonies for different identities on our campus. We know that QTBIPOC experiences are not the same for everyone, and while we one day hope to host graduation celebrations for all affinity groups, we do want to highlight the intersectionality of identities on our campus. We also want to recognize the collective power many graduating seniors and other students and supporters used to fight for change amidst the Black Lives Matter movement over this past year. We also recognize that some communities have larger numbers than others, and some more individualized celebrations would be very small. The last issue is DIP’s capacity and numbers; we simply do not have the numbers in our staff to host multiple graduation ceremonies. However, we hope to one day celebrate everyone’s accomplishments with separate ceremonies.

Certainly the University of Portland is far from the only institution to host segregated-styled graduation celebrations.

Many others offer them for ethnic, sexual and immigrational minority students as well.

These graduation celebrations are held in addition to the traditional, mainstream ones that serve as the commencements for the graduating class.