The president of Colorado State University offered measures to help “combat racism on campus,” and asked students and faculty for still more ideas in the wake of a “blackface” photo that appeared on Instagram and other social media.

Four white CSU students posed for a picture in sort of an homage to the movie Black Panther: Two of the students had their arms crossed against their chests complete with the caption “Wakanda forevaa.” (Wakanda is the fictional African country which is home to T’Challa, the superhero Black Panther.) 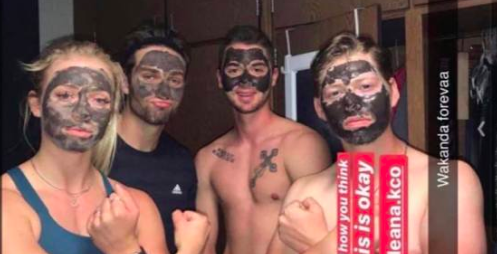 According to CBS-4, after viewing the photo, CSU President Joyce McConnell issued a statement saying the pic “caused a great deal of pain” due to the racist history of blackface. However, she also noted the photo was protected speech under the First Amendment and that the university could take no action against the students.

This did not sit well with many in the campus community. Student Myles Harrison said he didn’t consider the snap to be “free speech in any way,” noting it was “hate speech.”

CSU junior De’Janay Smith said she “felt sick” over the image, while Daizha Brown said it was “humiliating.” Brown added the photo “wasn’t addressed properly” and therein lies “the problem.” Angry students chalked the school’s plaza with the messages “ADMIN – JOYCE MCCONNELL, DO SOMETHING,” and, “ADMIN – STOP PROTECTING RACISTS.”

The First Amendment does not have an exception for hate speech.

In a follow-up message last Friday addressed to those “deeply harmed, hurt, frightened, and angered” by the photo (which she dubbed “despicable” and a “dehumanizing practice that continues today”), McConnell offered several proposals to help fight racism including:

–Diversity Symposium Event: I am already planning to sit down with our Vice President for Diversity, Vice President Mary Ontiveros, for a candid conversation, Wednesday, October 16, 2019 at the LSC. Our conversation will focus on how we can work together to truly address racism on our campus. Our conversation will be part of the upcoming campus-wide Diversity Symposium (October 14-18), which features extensive, dynamic programming, including keynote speaker Kimberlé Crenshaw. We urge all campus community members to attend the Symposium.

For her part, the female in the photo expressed regret for her role in the controversy. In her apology, Leana Kaplan noted the pic was taken after she and her friends “were experimenting with cosmetic facial masks.” Her father said Leana has been called “all kinds of obscene names” and has received death threats.