Organizers of a conference for conservative and libertarian student journalists are scrambling to secure a new venue for their event after one anonymous complaint forced its cancellation in the city of Alexandria, Virginia.

About 72 hours before the Intercollegiate Studies Institute’s Collegiate Network student editors’ conference was slated to begin this weekend, Hilton was told it could not take place due to COVID health regulations, organizers said.

“We received news from our hotel that the local department of health … in response to an anonymous health complaint, someone called expressing concerns about the safety of the attendees at our conference,” John Burtka, president of the ISI, told Fox News’ Tucker Carlson on Wednesday.

“In response to that complaint, an eager and willing bureaucrat complied and reclassified ISI’s educational program as a social event, and all social events in the state of Virginia are limited to only 10 people, effectively canceling our student journalism conference,” he said.

Burtka said there are many other conferences being held throughout the state and ISI is willing to complying with all COVID safety regulations.

“This had nothing to do with public health,” he said. “What it had to do with is there was someone who clearly did not want this event to happen. … We are working to find another city that welcomes freedom, diversity and civil discourses for a variety of perspectives.”

The spokespersons for the city of Alexandria and the state’s county health department did not respond to requests for comment Wednesday evening and Thursday from The College Fix.

Collegiate Network’s Director Ryan Wolfe told The College Fix on Thursday that officials used a game of semantics to shut down the event in Alexandria, calling it some sort of social “networking” event since the group has the word “network” in its name. 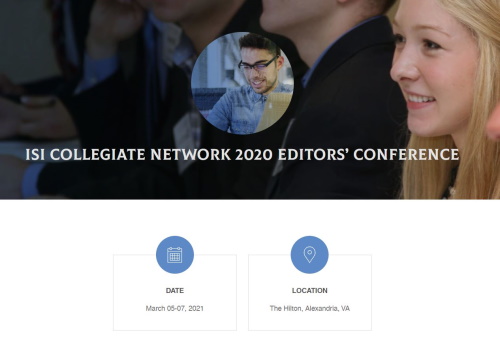 But network refers to the nearly 60 independent student news outlets the organization funds across the nation.

Wolfe said he does not know who complained, but the group has learned its lesson from the experience, noting that posting the name of the hotel for their events on their website is likely a thing of the past.

“In the past it’s been a useful detail,” he said. “Today, I guess it’s something that can get your event canceled.”

The conference will include professional news editors from publications such as The Federalist, Daily Caller, Washington Examiner, Reason and others. They share their tips and experiences with the student journalists.

Wolfe said as the group works to secure a new venue for this weekend’s event, they have no plans to publicize its location.

And Burtka told Carlson that while the organization expects to have the conference location resolved by the end of the week, “America has a much bigger problem with cancel culture and if we don’t address it now … to say enough is enough, we are going to destroy this country.”