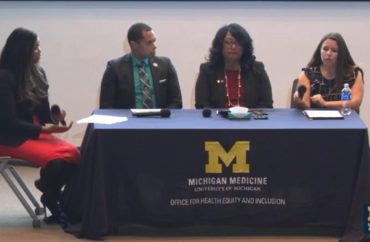 University of Michigan representatives gave conflicting answers on a promised “diversity of thought” forum, with one person contradicting his own statements within a week period. Furthermore, the panel referenced by the university appeared to only include liberal viewpoints.

“As we indicated earlier, we have no further updates to share,” University of Michigan spokesman Rick Fitzgerald told The College Fix on October 12. Fitzgerald provided a similar response in August. But on October 17 he pointed to an event on “physician-advocacy” which involved no conservative viewpoints and focused on “diversity, equity and inclusion.”

Dean Marschall Runge first made the promise of an intellectual diversity event in July, in the face of a controversy over the invitation of a Michigan Medicine professor’s planned comments at its annual White Coat Ceremony. Dr. Kristin Collier is pro-life but did not plan to speak on the topic. Her mere beliefs in the sanctity of life triggered a cancel campaign and a walkout by students.

“A forum on the importance of diversity of thought is being planned by Michigan Medicine, and additional details will be shared soon,” Runge wrote on July 13.

But after Fitzgerald’s comments, the communications director for Michigan Medicine, Rose Glenn, reached out on October 17 and pointed The Fix to a September 29 “Health Equity Advocacy & Social Justice” event as proof of a diversity of thought event. The event is part of a series of “Community Conversations” that all involved left-leaning phrasing, according to a College Fix review. The Fix emailed Dean Runge directly but Glenn responded on his behalf.

The Fix asked for clarification on the conflicting answers in an email to both Glenn and Fitzgerald, an associate vice president for public affairs. Fitzgerald, on October 17, sent The Fix a link to a requested copy of the September 29 event, but ignored a direct question about if this event constituted the “diversity of thought” forum.

Glenn was not included on the follow-up email and Fitzgerald ignored another attempt on Monday to confirm the Sep. 29 panel was the “diversity of thought” forum.

The College Fix also asked for clarity on what the “diversity” of views represented were – phrasing on the event used words like “change agents,” “structural changes,” “equity,” “intractable racism” and “healthcare disparities.”

An event description referenced how “supreme court decisions are weighing heavily on many caregivers,” in apparent reference to the reversal of Roe v. Wade by the Supreme Court of the United States on June 24.

“The first of these sessions will focus on when and how students, faculty and staff may express their passion to advocate for particular positions or to be change agents advocating for structural changes in our legal, political, work and learning environments to promote equity,” the event description stated.

All of the participants at the September 29 event appear to be liberals:

–The med school’s Office for Health Equity and Inclusion director Kristen Howard moderated the panel. She directed the audience to a separate university website for any questions about “reproductive justice” and promised a future discussion about the topic.

-Social work Professor Justin Hodge also participated on the panel. He is also a Democratic Washtenaw County Commissioner who “vehemently disagree[d]” with the reversal of Roe v. Wade,  according to a June 24 Facebook post. “This regressive Supreme Court is deliberately attacking our fundamental rights,” he wrote. “In just this past week, the Supreme Court has further curtailed voting rights, made the separation of church and state all but disappear, severely weakened the Miranda Rights meant to protect us from police abuse, and banned laws regulating concealed carry gun permits.” The series of decisions made this “one of the worst weeks in decades for civil rights and has made each of us less safe and less free.”

Several days later he returned to this theme, sharing an endorsement from Michigan Planned Parenthood. “The intersections of racism, sexism, classism, homophobia, and transphobia all too often harm the most vulnerable in our community–including in access to healthcare–and these oppressive systems must be dismantled,” he wrote.

-University counsel Maya Kobersy also served on the panel. Her interests include “affirmative action” and “diversity” according to her introduction. She submitted an amicus brief on behalf of the University of Michigan in support of racial quotas in 2015.

Panelists were also asked to explain their backgrounds in “diversity, equity and inclusion” to begin the event.

The Monday night panel seemed more promising for a discussion on debates on hot topics. It included Julia Minson, a Harvard professor who researches political differences and how to have productive conversation.

Other attempts to obtain information about the planned forum were unsuccessful. A public records request to the university for emails with the phrase “diversity of thought” sent to and from Dean Runge from July 11 to July 13, the day the first email was sent, yielded no “responsive records.” A follow-up inquiry yielded the original message.

The university denied access to another message because it was of an “advisory nature” and protected from disclosure.