Booster for Obama’s rules not identified as such

Harvard University has some of the most outspoken law professors in the country when it comes to defending due process in campus sexual misconduct adjudications.

Someone tell The Harvard Crimson.

The school newspaper doesn’t seem eager to tell readers that dozens of progressive, feminist and nonwhite scholars – in their own backyard! – might actually prefer the Trump administration’s leaked draft regulations for Title IX.

In fact, the only supposed expert the Crimson quoted in a recent report was influential in the development of the Obama administration’s Title IX guidance around sexual misconduct.

Did it tell readers her connection? No.

They called ‘The Hunting Ground’ a piece of propaganda

Here’s a little background on why the Crimson‘s flub is so revealing.

More than two dozen Harvard law professors published an op-ed in The Boston Globe in 2014. They denounced the university for expanding its sexual harassment policy far beyond federal law and giving preferential treatment to accusers in response to Obama administration pressure.

The new procedures “lack the most basic elements of fairness and due process” and are “inconsistent with many of the most basic principles we teach,” they wrote. Their public opposition led the law school to devise its own procedures separate from the universitywide procedures.

Nineteen law professors, again tilted heavily to the left, went on to publicly denounce the rape-culture documentary The Hunting Ground as a piece of “propaganda” that smeared one of their own students.

They highlighted “the disproportionate impact on racial minorities of discipline for campus sexual misconduct.”

The Crimson somehow forgot to ask any of them for their thoughts on how Harvard should respond to the Trump administration’s latest reported draft proposal, which would require colleges to let accused students cross-examine their accusers in some form.

Staff writer Simone Chu found one professor who is skeptical of the Trump administration’s direction:

Harvard Law School Professor Diane L. Rosenfeld, who teaches a course on Title IX, speculated that the leaked draft guidelines “could likely change” from their current iteration, after the required notice-and-comment period. …

“Many of the things that are in the policy are legally very problematic,” Rosenfeld said. “They seek to import private law standards and criminal justice standards into a civil rights context for school adjudication under Title IX. And they’re just simply not the same legal and regulatory system, so the same rules don’t apply.”

Very neutral-sounding. Except Russlyn Ali, the Department of Education civil-rights official who first developed the Obama administration’s Title IX policy, credited Rosenfeld’s research with “contributing” to the development of that exact policy.

And oh, here’s a photo of Rosenfeld with Vice President Joe Biden, the architect of the Title IX policy, at the press conference announcing this new “Dear Colleague” letter in 2011. 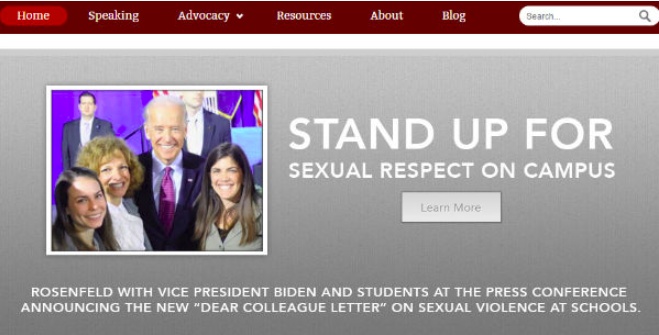 The Obama guidelines, which never went through a rulemaking, would spook Harvard and every other college that takes federal funding to devise procedures that those 28 Harvard law professors publicly denounced.

The Crimson, of course, didn’t note that Rosenfeld might have a stake in those guidelines that the Trump administration rescinded, since she helped create the crisis of rampant sexual assault on college campuses that justified them.

Staff writer Chu didn’t bother to seek any balance in the story. She also quoted an avowed booster for the Obama guidelines, Colby Bruno of the Victim Rights Law Center, who said the latest reported Trump draft would intentionally make “survivors” less safe and less likely to report.

You have to wonder about the quality of the Crimson‘s internal archives if a search for “Title IX” or “sexual harassment” doesn’t bring up the reams of law professors who have spoken out against the campus procedures that followed the Obama guidelines.

Or perhaps the newspaper just had a predetermined narrative.