Evergreen State College, possibly the most “woke” institution of higher education in the country, next week is bringing a man of pallid hue to lecture about … a white guy “doing the work of dismantling oppression.”

Not to mention, he was invited by a group called “The Women of Color in Leadership.” When you think about it, however, it actually makes perfect sense.

Tim Wise is an “antiracist essayist, author, and educator,” according to the flyer below, and will give two lectures on February 26 — one at Evergreen State, and later on at the Washington Center in Olympia, Washington. 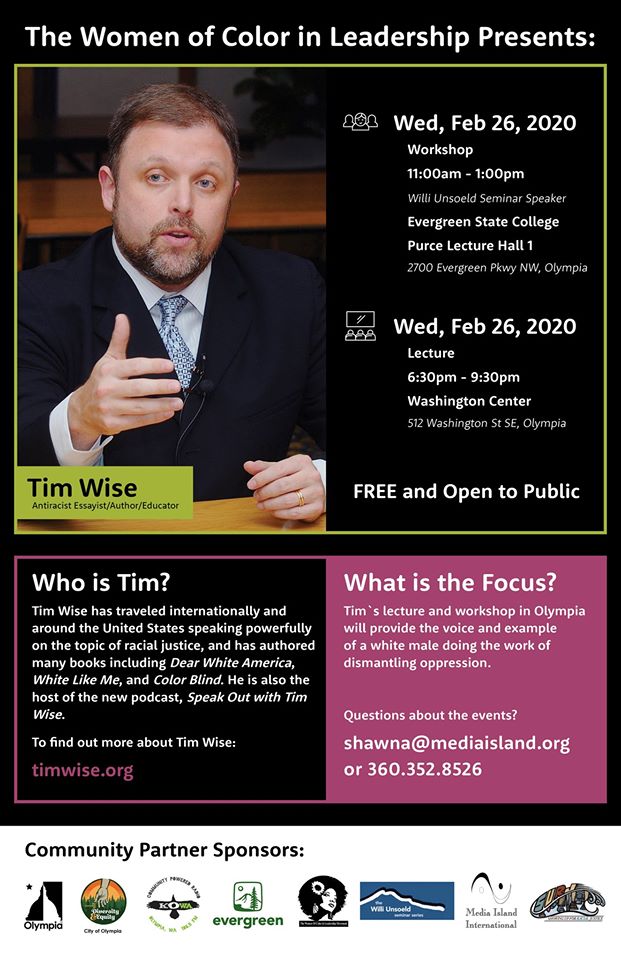 Wise’s views fit right in with the progressives at Evergreen State, site of the so-called “Day of Absence” where white people were expected to vacate campus “to demonstrate the power” of no Caucasians being around. It’s also where a black professor trashed her white colleagues as “motherfuckers,” and where a lecture equated free speech with “white supremacy.”

Wise has said that Fox News hosts are “backward and bigoted,” that white people “are mentally weak,” and that whites lie when the say they have black friends. He’s also stated that those who believe “in a God of hell/damnation” deserve to be “mocked viciously” and “run out of the public square,” and that believers in the “morality on the Hebrew Scriptures” should “be locked up.”

Hilariously, the author recognizes that his “prominence” as a white guy poses a problem, but never fear — he claims his job is “to hold up the work of people of color.” He “holds up” that work at a very nice price tag, typically between $10,000-$20,000 a pop. Wise claims his booking agency “puts money back into” endeavors “led by individuals and groups of color.”

Women of Color in Leadership organizer Shawna Hawk advertised next week’s Wise appearance thusly: “Are you a white person who fights the racism within you? Are you ready to take the lead on fighting racism AND dismantling systems of oppression in this community? Would you like to improve your skills for this work?”