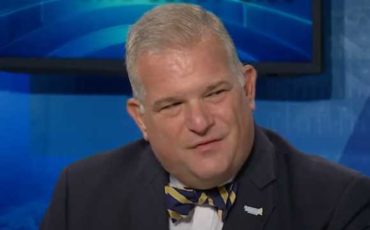 Thomas Minar was found guilty of child enticement, among other charges

An ex-president of Franklin College in Indiana was sentenced on Monday to six years in prison and six years of extended supervision by a Wisconsin court, The Statehouse File reported.

Police arrested former president Thomas Minar (pictured) in January 2020 after he used a dating app to arrange a meeting with a person whom he believed was a 15-year-old boy but who was in fact an undercover police officer, according to Inside Higher Ed.

The New York Times, citing the criminal complaint, reported that messages sent by Minar to the officer included photographs of a man’s groin, discussions of sex and plans to meet on Jan. 6 in a McDonald’s parking lot, where he was arrested.

Minar had “communicated with an individual who the actor believed or had reason to believe had not attained the age of 16 years with the intent to have sexual contact or sexual intercourse.”

Minar had been in Wisconsin to help care for his elderly mother, who died in December 2020, The Franklin News reported. Minar claimed he had arranged the meetup with the boy he knew as “Tyler” for “friendship” and “mentoring.”

Law enforcement charged Minar with 15 crimes, including child enticement, exposing a child to harmful “narrations” and 12 counts of child pornography possession, according to The Statehouse File. He pleaded no contest to four of the charges in March 2022.

His university fired Minar shortly after the arrest

Minar and his counsel cited “difficulty in his job” as one of many issues leading to his criminal behavior, according to The Statehouse File.

He has been prohibited from contacting minors and from using the internet without prior approval from his probation agent. He will also be listed in the Wisconsin State Sex Offender registry.

Franklin College fired Minar in January 2020 shortly following his arrest, according to IndyStar.

“The safety of our campus community – especially our students – is always our first priority,” said Jim Due, then-chair of the Franklin College Board of Trustees.

“We are deeply shocked and gravely concerned by the reported behavior of Dr. Minar that led to his arrest in Wisconsin, and we will continue to cooperate fully with authorities,” he said.