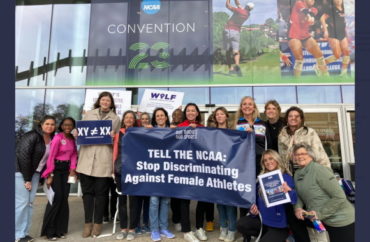 A cadre of women’s advocacy groups protested outside the NCAA convention on Thursday and hand-delivered a legal demand letter and petition signed by thousands of people threatening a lawsuit against the association if it does not rescind its pro-transgender policies.

“Today, we intend to personally tell the NCAA to stop discriminating against female athletes by handing them a petition that we have garnered nearly 10,000 signatures on in just a couple of days,” former University of Kentucky swimmer Riley Gaines said at the start of the demonstration that included a parade of speeches from female athletes demanding much the same, NBC reported.

The legal demand letter is from the Independent Council on Women’s Sports, or ICONS, a nonprofit network of athletes, coaches, experts and parents. It was delivered to the NCAA Office of Legal Affairs during the 2023 NCAA Convention in San Antonio, the organization stated in a news release.

The letter tells the NCAA that if it does not “protect female athletes from discrimination on the basis of sex, we will embark on legal action to compel you to do so,” adding:

To avoid legal action, the NCAA must comply with civil rights law immediately by:

Repealing all policies and rules that allow male athletes to take roster spots on women’s teams and/or compete in women’s events;

📢 The magnitude of this day in the movement to defend the rights of women and girls in athletics cannot be understated. The tide has officially turned. https://t.co/oyGbz9hF5v

NBC reported that the “Transgender Student-Athlete Participation Policy was updated a year ago, taking a sport-by-sport approach that brings the NCAA in line with the U.S. and international Olympic committees.”

“Full implementation of the policy was scheduled to be phased in by August but the NCAA Board of Governors this week approved a recommendation to delay that through the 2023-24 academic year ‘to address operational considerations.’”

In response to the demonstration, pro-LGBTQ rights group Athlete Ally told CNN: “We want to see all athletes, including transgender and nonbinary athletes, protected from harm. Demonstrations like this that present transgender people as threats to women’s sports – rather than the humans they are – are not only factually incorrect, but are also deeply harmful and help foster the violence and harassment these youth are already facing.”

But the women’s advocacy groups argue the harm is done to biological females.

One person who spoke at the demonstration was former athlete Blake Allen, who “protested a male being allowed to undress in her girls locker room and when she protested, the school stopped all of the girls from using the locker room,” according to conservative Texas attorney Jonathan Saenz.

Female athlete Blake Allen protested a male being allowed to undress in her girls locker room and when she protested, the school stopped all of the girls from using the locker room. She’s fighting back as an @ADFLegal client. pic.twitter.com/FGUvIET84r

“In the world of college sports, it is impossible to provide equal opportunities for both sexes (as required by Title IX) without female-only teams. Yet the NCAA implements and perpetuates a policy of allowing male athletes on women’s teams, even as sports governing bodies and federal courts increasingly reject these unjust and inequitable policies that exclude young women from their own teams,” the letter states.

MORE: Kentucky swim star: Thomas NCAA Woman of the Year nod ‘another slap in the face to women’