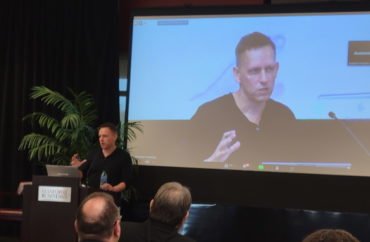 The conference brought together some of the brightest minds in the nation from all sides of the political spectrum who vigorously defend freedom of thought, inquiry, debate and speech.

Amid this two-day convergence of scholars came suggestions that have not been presented widely before in higher education circles, but should get more traction.

McConnell: “Borrowing from [a] successful left-wing strategy is to appoint some officers. DEI is all over the place, I can’t tell you how many administrators there are who do this. There is not a single administrator at Stanford whose job it is to protect either student or faculty speech.”

“I have had students call me … and say, ‘This happened to me, where do I go?’ I can’t tell them a place to go. There’s no phone number, there’s no office. When you get an officer whose job it is to promote freedom of thought in the university, they become not just enforcement, they become advocates. That’s why the DEI people are so powerful, right? They elevate the issue. Let’s have some of our own freedom of thought officers.”

Lukianoff: “Require academic freedom and free speech ombudsmen. Using administrators to battle administrators is something I’m increasingly coming around [to]. I can think of ways to keep that position from being hectored.”

“I think if there was such a thing as like a super-hard BA-GED, essentially a crazy difficult test that you could take that just skips the bachelor’s altogether for the super hard working and super smart, I think that that would scare the living hell out of a lot of elite institutions, because we know people who would pass that and could go straight on to law school.”

“…We should be doing massive studies, including on the academically adrift theory. We should be doing that to the entire country. We should refine it, improve it. About 10 years ago, what this showed at something like 34 campuses that they looked at, they saw no improvement in critical thinking skills for about half of the people they surveyed.”

“Think about this. I used to work at Burlington Coat Factory. I can guarantee you that my critical thinking skills improved from the ages of 18 to 20, or for that matter, 14 to 16. So in that sense I am saying if you show no improvement in critical thinking skills during those formative years they’re actually harming you, they are making you dumber. … It’s such a scam, a lot of these schools, and I say this as a proud Cardinal myself, that they take smart people who are hard working and then all they have to do is not ruin them. … If you actually studied [Bryan Caplan’s signaling theory] you’d start realizing that the cost-benefit analysis of the amazing amount of resources that we are pouring into higher ed is way over the top.”

Quantify and articulate the shortcomings of STEM

“There is definitely always some radical crazy people who’ve said crazy things but the standard is something that is sort of technocratic. Shakespeare doesn’t matter, the humanities aren’t that important, we have the sciences, we’re making progress in the sciences, we’re building a particle accelerator, etc. We’re involved in all this sort of cutting edge scientific research and that’s fundamentally what the university is about, that’s what shows it’s on track, that it’s valuable. You have to always ask the question about the sciences and the technology and how they are doing.”

“The version of the question that I have come to ask over the last 15 years is the universal question, is about the progress of all this: how fast are science and technology as a whole progressing? … It is dizzying how fast things are improving, or is it quite the opposite?”

“If one could show the science and technology areas are actually pretty weak, that the so-called crown jewels of STEM are not actually delivering the goods, this strikes me as a decisive, crushing blow. Humanities we all know are ridiculous, but if STEM is ridiculous, we have nothing left at all. It is very hard to valuate this stuff in general because one of the other problems of the post-modern university is that it is extremely compartmentalized, extremely specialized, and you are supposed to only be able to comment on these things after half a lifetime of study.”

Get it in writing

“Universities are committed to freedom of speech, the problem is not the commitment. The problem is the commitment is not enforced. That’s where we should be focusing our attention. The purpose of university speech policies is to restrain the actions of the university’s administrators, the provosts, the president. It’s not surprising the enforcement is somewhat lax, the wrong people are in charge. … The problem here has a lot to do with incentives. … The solution is to change the incentives. … In my experience, deans are not bad people, they’re not evil people, and they’re certainly not ideologues. They’re administrators. They have a job to do and they respond to incentives, which is to keep the school going. So they have no incentive to uphold the principle. So what can we do?”

“….Write the following sentence into the university’s speech policy: ‘The university will summarily dismiss any allegation that an individual or group has violated a policy of the university if the allegation is based solely on the individual’s or group’s expression of his, her, or its religious, philosophical, literary, artistic, political, or scientific viewpoints.'”

“Why is that important? … In some states, it’s considered legally binding or grounds for a lawsuit. … This would make the speech policy self-enforcing by giving anyone investigated or punished solely for protected speech the ability to bring a grievance against the university.”

“Some of these stakes might take more action, more collective action, to get desirable results. I am going to propose two potential ideas for discussion. I am not necessarily advocating for them. … The first is we talked about the Chicago trifecta – the Chicago Principles, the Kalven Report and the Shils Report – you could tie federal funding to adopting and enforcing these principles in some ways, like a Title IX kind of thing. That’s one idea.”

“The second idea is a way to enforce these. You could enable lawyers to file class-action lawsuits if you could prove that the university was not following these. … You could file a class-action lawsuit, and every student who paid tuition that year gets their tuition refunded, or something like that.”