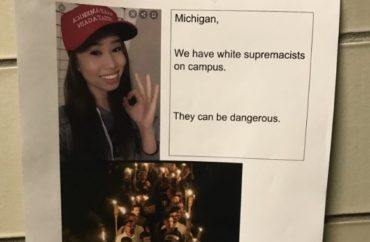 Kathy Zhu is no shrinking violet, but at least she puts her own name on her controversial statements.

The University of Michigan student, a Chinese immigrant and loud booster of President Trump, told her 162,000 Twitter followers Tuesday morning that fliers had been posted around campus branding her a “white supremacist.”

The flier includes a face shot of Zhu wearing a “Make America Great Again” hat and making the “OK” sign, which the Anti-Defamation League claims was “falsely” turned into a “hate symbol” by 4chan users two years ago.

“Michigan, we have white supremacists on campus,” the flier reads. “They can be dangerous.” Below the photo of Zhu is an image apparently taken from the “Unite the Right” march at the University of Virginia in 2017.

“This is complete slander and incites violence towards me,” she tweeted. “Being a trump supporter does not make me a white supremacist. I’m also asian if you [social justice warriors] can’t tell.”

While she made light of the flier, asking her anonymous hater(s) to “use a better picture of me next time,” Zhu responded critically to a Twitter user who asked why she didn’t “laugh that poster off.”

“Maybe because people actually use violence against trump supporters. Have you not seen the news?” she wrote.

This has been posted around my school at @UMich

This is complete slander and incites violence towards me.

Being a trump supporter does not make me a white supremacist.

MORE: Zhu loses Miss World title for refusing to try on a hijab

Zhu previously made headlines when the former Miss Michigan lost her title because she had publicly refused to wear a hijab two years earlier. Miss World America organizers said she had brought the organization “into disrepute.”

She told The College Fix in an email Tuesday afternoon that she learned about the fliers from four people who sent her images this morning. “I wasn’t on campus myself to see them, but I am going to walk around campus later today to take down anymore that I see.”

She provided other images she had received. One associates her with the Ku Klux Klan and another implies supporting Trump and supporting the U.S. military are mutually exclusive: “All colors have served this country.”

Zhu visited campus police Tuesday to file a report, and they will give her their “game plan” Wednesday, Zhu told The Fix early Tuesday evening. Police are scanning campus for more posters and “might also look at security camera footage to see who was the one that posted the fliers.”

No university administrator has reached out to her since she called attention to the fliers, she said. 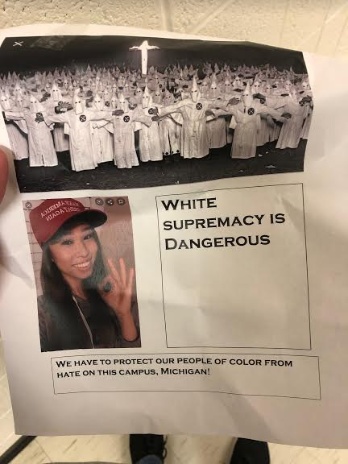 A spokesperson for the university responded to a Fix query late Tuesday, saying it was “important” that Zhu had reported the incident to campus police. But he did not answer how it planned to respond to the incident, particularly if it saw the distributed fliers as speech or a personal threat.

The Fix asked the university to compare the incident with Zhu to a similar incident at American University in 2017.

Shortly after the election of a black female student body president, bananas were hung around the private campus “in the shape of nooses” with the letters “AKA” written on them, which were understood to refer to Alpha Kappa Alpha, her African-American sorority. (They also said “Harambe,” referring to the then-unavoidable gorilla meme.)

The administration referred to the bananas as “racist, hateful messages” that threaten “the safety of our students.” While it launched a sweeping investigation that included the FBI, American University said a year later that it had exhausted “all credible leads” despite releasing surveillance footage of the apparent perpetrator to the public.