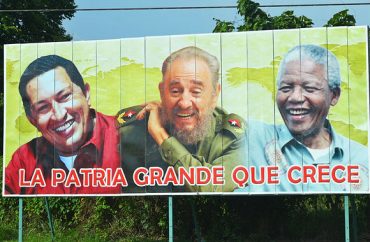 Scripps College sure does love the inhumane, incompetent, repressive, socialist government of Venezuela.

How else to explain why the Claremont Consortium women’s college is hosting and funding “speakers heavily praising Nicolas Maduro’s regime in Venezuela,” as reported by the Claremont Independent, for the third semester in a row?

Unlike previous semesters’ events, no Venezuelan government officials spoke at this series, which was sponsored by the dean of faculty funds and Latin American & Caribbean Studies, Gender, Feminist and Sexuality Studies departments.

The Independent attended one event featuring alumna Jeanette Charles, a “daughter of the Haitian diaspora,” doctoral student in the history of Latin America and the Caribbean at UCLA, and activist campaigning to end sanctions against Venezuela, according to the poster for her talk.

While Scripps notes that Charles (left) was a journalist for teleSur, it fails to mention that the news outlet is “primarily funded by the far-left governments of Venezuela and Cuba,” according to the Independent.

(Her bio at MintPress News says she’s a “member of the Chiapas Support Committee and a doctoral student at the Bolivarian University of Venezuela in Caracas where she works with the Catedra Libre Africa focusing on Africa’s historic legacy and present struggles across the Americas.)

Her talk about “Venezuela’s Black Majority” suggested that Hugo Chávez, the former president and architect of Venezuela’s downfall, was “immortal and even god-like” by describing him as “physically dead,” according to the Independent.

Charles alleged that Maduro’s regime is trying to escape “American and European hegemony” and that racism is responsible for the country’s woes:

During the question and answer session, one student asked why Venezuela should be supported despite having a severe “lack of basic resources” for its people and that the regime didn’t allow its main opposition to run for office in the recent May 2018 election.

Charles’s response largely avoided the second part of the student’s question. Addressing food shortages, she replied “[food shortages are] caused by by Venezuelan private companies that don’t cooperate with the government,” and added that many such companies are owned by “people of primarily Italian or Portuguese ancestry,” implying racism against non-Caucasians may play a factor in the lack of resources provided to Venezuelans.

She claimed that the hordes of Venezuelan refugees “aren’t real refugees” because “lots of them come back” after finding that they can’t handle living in capitalist societies. Those who return sometimes confess on state television that the outside world is “no easier” than Venezuela, Charles said.

Other events in the series, which concludes today, are “Zapatismo 101 Workshop” (explaining the militant movement in Mexico’s Chiapas that Charles supports); “Bolivia’s economic miracle and Indigenous-led change”; “Gendered Perspectives on Black Venezuela in a Socialist Age”; and “Africa’s Cuba: Black Liberation, Women & Socialism.” (Notice a theme?)

Scripps College refused to allow conservative author Andrew Klavan to speak on campus last spring, telling the Independent – which had invited him – that “we aren’t able to accommodate this event” for any date or venue from February through May.

Read the Independent report, which includes the posters for the series.