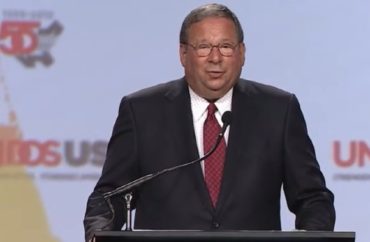 David Cohen served as chair of the board of trustees of the University of Pennsylvania while President Joe Biden took in nearly $900,000 for a few years of a minimal obligation teaching job at the Ivy League university.

Now Cohen (right) may get to represent the United States with our neighbors to the north, after President Biden appointed him to the role of Canadian Ambassador.

The appointment comes after Penn President Amy Gutmann received an appointment to be the ambassador to Germany, despite having no experience in national security or foreign relations issues. Her political science educational and work background has focused on political philosophy and ethics issues.

The College Fix reached out to Penn to request a copy of Cohen’s resume to learn more about his background in Canadian politics, but did not receive a response to an email sent to the media relations team in the past week.

He is a former top executive with Comcast and currently serves as an adviser to the current CEO. He also helped successfully fundraise over $100,000 for the Biden campaign, according to Business Insider.

MORE: Penn professors say running a university is like serving as ambassador

He also worked for Philadelphia Mayor Ed Rendell as his chief of staff. Rendell later served as governor of the Keystone State.

Cohen is a mega donor to the Democratic Party, while also giving money to Republican campaign committees and individual Senators and Representatives, according to Federal Election Commission records.

The Fix reached out to Professor Greg Inwood, a Canada-U.S. relations scholar at Toronto’s Ryerson University, for his thoughts on the appointment but did not receive a response.

A commentator at the left-leaning American Prospect said that Biden erred by picking Cohen, due to his corporate ties.

Max Moran praised Biden for nominating anti-monopoly advocates to several positions, but said it contrasted with his Canadian ambassador pick, whom he called “monopolism’s most vociferous and shameless defenders.”

He said the nomination “is part of a troubling trend.”

“Biden is continuing one of the oldest forms of patronage in American politics—offering cushy ambassadorships to well-connected political allies,” Moran said.

The White House had previously pledged to only give 30 percent of the ambassador positions to major donors — President Donald Trump’s nominees were about 44 percent from his donors and 56 percent from career Foreign Service officers, according to Axios.