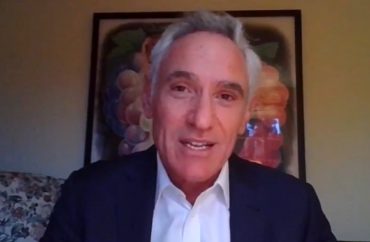 Criticizes ‘smears’ leveled against him

“A key part of learning how to think critically” is hearing ideas someone might not agree with, Scott Atlas (right) told the virtual audience at a recent virtual Stanford College Republicans event.

It’s a cause he has been fighting for against his Stanford peers, particularly since he began criticizing some COVID mitigation measures.

Critical thinking and free expression are under assault due to responses to coronavirus, the former coronavirus advisor to President Donald Trump and a former Stanford medical school professor said. Atlas is currently a fellow at the conservative Hoover Institution at the private California university.

“The coronavirus pandemic has been a great tragedy; there is no doubt about that,” the medical doctor said.

“But it has also exposed profound issues in America that now threaten the very principles of freedom and order that we Americans often take for granted,” he said during the event “Science, Politics, and Covid-19: Will Truth Prevail?” on March 5.

He described how fellow Stanford academics and people in the media have gone after him for views on herd immunity and his beliefs on COVID lockdowns.

“Instead of rethinking failed policies and admitting their errors,” Atlas said, “some faculty members have chosen to employ smears and opinion pieces and through organized rebukes against me and others who disagreed” with the measures taken.

He said that the criticism is also directed at people like him who “dared to help the country under a president they despised.”

Reminds audience he didn’t oppose all lockdowns — just unscientific ones

Atlas also said he supported lockdown measures to protect the elderly and other vulnerable populations.

“I was one of the first to push for increasing protections to those most at risk, particularly the elderly, because they were dying by the tens of thousands,” Atlas said. He said that “the chosen policies implemented by the states, recommended by the other task force members were failing.”

Atlas did not provide names of who specifically was engaging in “smears” against him. The Stanford Daily has previously said that Atlas’ admonition to “rise up” against Democratic Michigan Governor Gretchen Whitmer’s lockdowns was a form of incitement.

In September 2020, an open letter signed by dozens of researchers and doctors affiliated with Stanford University called out Atlas, saying many of his statements “run counter to established science.”

“To prevent harm to the public’s health, we also have both a moral and an ethical responsibility to call attention to the falsehoods and misrepresentations of science recently fostered by Dr. Scott Atlas,” it read.

Atlas said that while not fully comprehending all aspects of the pandemic is understandable, it is not acceptable to accuse him of uttering falsehoods.

“It’s understandable that most Stanford professors are ignorant of the data about the pandemic. But it’s not acceptable to claim that I made recommendations that were ‘falsehoods and misrepresentations of science.’ That is a lie,” he said.

Warned of problems that will continue to be revealed

He also called the consequences of global lockdowns “severe” and pointed to the decimation of the Bangladeshi garment industry as a foreign example of how policymakers put people further into poverty.

“The harms are really incalculable, but they will be compiled over the next years and decades,” Atlas said. “We will see” a number of consequences, including the negative effects of failing to properly educate children.

“We need to be honest,” about the consequences, Atlas said.