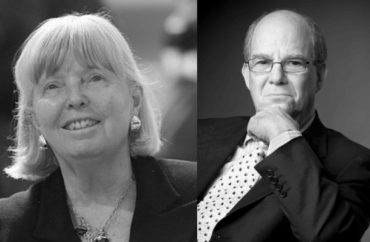 Foundation has funded a number of similar centers

The Harvard Kennedy School, the university’s public policy college, recently received a $5 million grant from the James M. and Cathleen D. Stone Foundation to further the school’s research into “wealth distribution” and “inequality.”

The Ivy League university will establish the James M. and Cathleen D. Stone Program in Wealth Distribution, Inequality, and Social Policy. The program will allow Harvard researchers to “better understand and address the causes and consequences of wealth inequalities in different populations around the world,” the Kennedy School stated in a news release.

The new program will also build on Harvard’s existing Multidisciplinary Program in Inequality and Social Policy, adding a league of graduate students dedicated to studying “wealth inequality” as well as public events that will help to communicate research.

Jim Stone (pictured, with his wife) said that “excessive wealth concentration can carry society away from meritocracy, productivity, empathy, mobility, and democratic ideals.”

The College Fix emailed the Stone Foundation’s general email address and asked about the timeline and deliverables for the donation and what the nonprofit’s concern is with wealth distribution. The nonprofit did not respond to two requests for comment sent in the past two weeks.

A spokesperson responded Monday afternoon after the publication of this article.

“The Stone Foundation is committed to expanding exploration and open debate on a number of important public policy issues,” Sonja Plesset told The Fix via email. “The increasing concentration of wealth at the top of the distribution, and its consequences for mainstream working Americans, is among those issues.”

“Programs we sponsor differ significantly among themselves, so for details we encourage the press to speak directly to the universities involved. We do not dictate or direct any university program’s activities,” Plesset said.

Elmendorf did not respond to emails from The Fix sent in the past two weeks that asked about how the current economic system is unfair, the research plans for the “critical mass of scholars” mentioned in the news release and the timeline and deliverables for the donation.

Other universities host centers founded by the Stone Foundation.

The City University of New York Graduate Center, established a Stone Center on Socio-Economic Inequality to study the “consequences” of such inequality in 2016. UC Berkeley’s Center on Wealth and Income Inequality began operations in 2019 and serves to “deepen…understanding of the inequality in society.”

Brown University opened its James M. and Cathleen D. Stone Inequality Initiative to study “how great wealth distorts –perhaps even threatens– the republic” and how it interacts “with longstanding racial and gender inequalities.” And, the University of Michigan’s Stone Center for Inequality Dynamics, which launched in 2021, will “pursue cutting-edge research to comprehensively understand changes and stability in inequality across generations.”

Many foreign universities have also chartered similar centers. The Institut Européen d’Administration des Affaires, a global business school based in France, established its James M. and Cathleen D. Stone Centre for the Study of Wealth Inequality in 2017 to “serve as the leading venue for the research and teaching of income and wealth inequality issues.”

University College London launched its new Stone Centre on Wealth Concentration, Inequality and the Economy in 2021 with the aim of providing “a clear understanding of the causes of wealth inequality, and its economic and political consequences.”

Editor’s note: The article was updated with comment from the Stone Foundation.