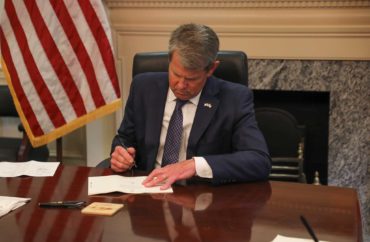 Georgia Governor Brian Kemp (pictured) signed House Bill 1 into law Tuesday after it passed both chambers with majority support from Republicans and some support from Democrats.

The bill, also known as the “Forming Open and Robust University Minds Act,” will prevent the establishment of zones restricting campus expressive activity.

The FORUM Act bans “free speech zones” at all public colleges and universities “outside of which expressive activities are prohibited for the campus community.”

The Foundation for Individual Rights in Education, which supported the bill, stated that the new law is an improvement on a campus speech bill passed in 2018, previously known as Senate Bill 339. The standard established under SB 339 “was more stringent than the standard courts have used to strike down free speech zones under the First Amendment,” FIRE stated. The new legislation fixes that problem.

The new FORUM Act better restricts limitations on free speech to “precisely reflect the extensive case law,” according to FIRE.

State higher education institutions now may impose “time, place and manner restrictions” on campus free speech and other expression, but the regulations must be content neutral and serve a “significant government interest.” They also must include alternatives to allow for free speech.

The FORUM ACT also affirms a definition of “student harassment” determined by the U.S. Supreme Court in Davis v. Monroe County Board of Education. The standard prohibits universities from identifying free expression as harassment by narrowly defining the latter as activity “so severe, pervasive and objectively offensive that it effectively bars the victim’s access to an educational opportunity or benefit.”

Georgia is among more than 20 states to have banned “free speech zones,” including Ohio, Oklahoma, Alabama and Indiana.