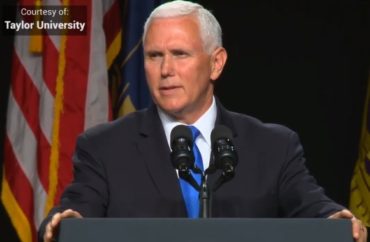 Some grads and faculty at Taylor University walked out before Vice President Mike Pence gave his keynote address as commencement speaker Saturday, ironically to protest Pence as not inclusive enough.

But here’s the most important part of how this story ended — most of Taylor’s graduating class did not leave, and after his talk Pence received a standing ovation.

It’s important to give credit to the vast majority of students who stayed and listened to Pence, and be thankful it was only a handful of students who apparently couldn’t stand to listen to the vice president of the United States for just a few minutes.

Remember this was the Christian campus at which one student was even “physically shaking” in anger over Pence’s invitation.

“For the record, there were no reports of any graduates being harmed by the vice president during the commencement ceremony,” joked Fox News columnist Todd Starnes. “The students were later allowed to return and participate in the rest of the commencement, the Chronicle-Tribune reported. Frankly, they should’ve been escorted off school property.”

As for Pence, he was a gentleman and a professional.

“Pence, undeterred by the controversy, spoke broadly about the importance of freedom of religion and urged the graduates to remain strong in their beliefs in the face of persecution. A livestream of the speech shows him receiving a standing ovation,” Newsweek reports.

“I promise you,” Pence said. “We will always stand up for the freedom of religion and the right of every American to live, to learn, and to worship according to the dictates of your conscience.”