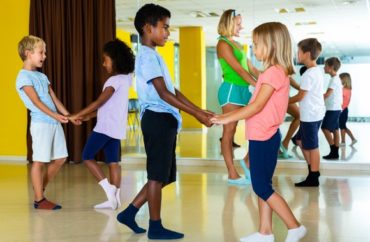 As if Harvey Weinstein were teaching ‘social dances’

Its 2014 ad campaign claimed that several prestigious colleges had a “rape problem,” yet an “affirmative consent” tutorial it released the same year (below) actually celebrated a woman acting without a man’s consent.

UltraViolet denounced Bernie Sanders during the 2016 presidential campaign for saying campus rape is a crime that “has to” be investigated by police, not just colleges. It claimed that stronger due process protections in Title IX proceedings are pro-rape, rather than pro-truth.

Now the group, whose vagina-shaped logo suggests transphobia, is trying to get back into the spotlight by jumping on a controversy involving school dances.

In an attempt to prevent students from being humiliated at school dances and discourage wallflowerism, the school bans students from rejecting peers who ask them to dance. It’s gender-neutral, since girls and boys take turns asking each other.

The policy blew up the internet last month when a sixth grader’s mother blasted the school on Facebook for forcing her daughter Azlyn to dance with a student who makes her “uncomfortable.”

“NO MEANS NO,” Alicia Hobson wrote Feb. 19, accusing the unnamed boy of “saying something very disturbing of a sexual nature”:

Girls HAVE to learn that they have the right to say no and that those around them have to respect that. I’m not going to quietly stand by while my daughter and all of her classmates are being wrapped up in rape culture. No way.

When the principal refused to dump the all-comers policy and the superintendent refused to get involved, Hobson said she would go up the ladder to the Utah Board of Education. (UltraViolet claims to be representing Hobson for media interviews.)

Principal Kip Motta told The Salt Lake Tribune that students should tell him before dances who they don’t want to dance with, so the disliked student won’t be publicly humiliated on the dance floor. “The reason for the policy as we have had it (in the) past is to make sure no kids feel like they get left out.”

Rather than recognizing this school dance policy as a tradeoff between progressive ideals – inclusiveness and personal freedom – UltraViolet portrayed it as the foundation of “rape culture.”

It blasted out a press release Monday that claimed its petition had drawn more than 14,000 signatures since its release “late last week,” but UltraViolet’s description of the petition doesn’t actually match its text.

“A new petition from UltraViolet, a leading national women’s advocacy organization, is demanding that Rich Middle School in Rich County, Utah teach consent after staff forced an 11-year-old student to dance with a boy who made her uncomfortable“:

UltraViolet argues that school boards should teach consent in class as a non-negotiable and necessary component of any social interactions with fellow students, and that forcing any student to dance with someone they do not want to will send a signal to young people that saying ‘no’ is not an option.

The petition doesn’t actually make this specific demand, though. It’s headlined “No means no; young girls must be taught consent,” but doesn’t specify who “must” teach them.

(The phrase “no means no” also belongs to a previous generation of feminism, and is currently considered sexist for putting the onus on women to reject men’s advances. “Yes means yes” is the shorthand for affirmative consent policies endorsed by UltraViolet, which functionally make it impossible for accused students to prove their obtained consent.)

The petition simply implies that UltraViolet supports the removal of the all-comers dance policy. It again passively advocates that girls “should be taught that no one can touch their bodies without consent,” without mentioning a school policy:

This is an issue that goes beyond just one girl or one school district. Policies like this one teach boys from an early age that they have the right to touch girls, and teach girls that they can’t say no. It’s this kind of logic that gets used to doubt women and defend men like [convicted Stanford rapist] Brock Turner, Harvey Weinstein, and R. Kelly.

The petition also has a footnote to nowhere that is apparently supposed to identify a news source for one of its claims, suggesting its drafting was rushed.

UltraViolet’s real purpose with the petition is transparent: to build its targeted email list. The petition asks for name, email, ZIP code, school relationship and whether the signatory’s school has a similar policy.

“This issue goes beyond one girl in one school district,” said Shaunna Thomas, UltraViolet co-founder and executive director, in the release.

But the group is keeping its hostility focused on the Rich School District, linking to a contact page for school board members in its Monday release.

While UltraViolet said Hobson plans to testify before the board March 16 to “fight for her daughter’s right to consent and get the school to do the right thing,” in keeping with the petition’s overall sloppiness, it doesn’t say what Hobson is specifically seeking.

She told “TODAY” she wants the board to revise the dance policy, but the story mentions nothing about the consent education program being pushed by UltraViolet.

Hobson appears to be much more constructive than the militant feminist group that is using her to further its more extreme ends.

She not only praised the school and Principal Motta in a subsequent Facebook post – administrators whom UltraViolet said should be “ashamed” – but also asked for recommendations of “ballroom dance companies” who could teach the kids social etiquette around dancing.