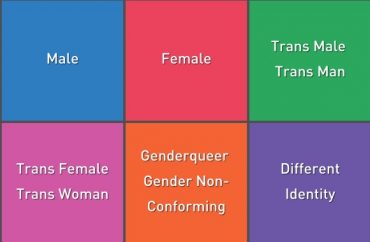 Funding threatened if they don’t change it

You don’t have to be male or female to enjoy Valentine’s Day. Wait, what?

The Harvard Computer Society, a student organization, found itself under fire for releasing a date-matching algorithm that only listed “male” and “female” as gender options but let students “elaborate on their gender identity in a text box.”

The Harvard Crimson reports that 26 members of the Undergraduate Council, including the president and vice president, signed a letter scolding the club for its discriminatory algorithm.

The chair of the student government’s BGLTQ+ Caucus, Nicholas Whittaker, also released a letter on behalf of “the gender non-conforming and gender queer community” saying that romance doesn’t depend on “strict gender bearings.”

Cuan-Martinez told the meeting he took “full responsibility for the exclusion that we have created on campus.”

Datamatch is a Valentine’s Day tradition going back to 1994, according to the Crimson. It partners with Harvard Square eateries “to pay for the meals of the couples it matches” through its online survey.

Because the student government “partly funds” those meals, Whittaker said he would propose yanking that funding if Datamatch doesn’t conform to his whims by next year:

“I’ve been in talks with the [UC’s] Student Initiatives Committee as to making that a reality, perhaps attaching it as a requirement to their funding for this year.”

Student Darius Johnson said the disconnect between the two gender options and the text box “was super disconcerting to me” because it implied male and female were “normal” options:

“Calling gender non-conformity or any gender non-binary identity ‘extra’ is sort of tactless nomenclature,” Johnson said. “You can’t put a part of someone’s identity in parentheses and say that’s ‘extra’ information about them.”

The algorithm’s lead developer, Raynor Kuang, explained in a Facebook post last week following the uproar that the two-gender option was necessary to “have enough matches to fill out this group of people’s usage of Datamatch”:

Very importantly, I really want to stress that it’s not any choice on the part of this group of people, any inherent nature in their identity; it’s an outcome of a property of society in its current incarnation, that those who are genderqueer/transgender are easily and often discriminated against.

Even if the algorithm let users choose matches only for “non-binary gender / non-binary seeking,” Kuang continued, “to ever have them match exactly, we would have to enforce categories once again”:

This scenario would, no matter what, be a restriction on at least some person’s gender identity since no list of “categories” (again, quotes for derision, since people are not categories) would be enough to capture all possible identities.

He proposed a modified system that wouldn’t be ready until the following Valentine’s Day that adds a non-binary gender option and “interested in” field.

A Datamatch team member told The College Fix in a Facebook message:

[W]e remain fully committed to improving Datamatch to be fully gender inclusive by the 2018 edition, and the gears already turning to make such progress.

Read the new and older Crimson reports on the Datamatch debacle, and Kuang’s Facebook post on the technical challenges.