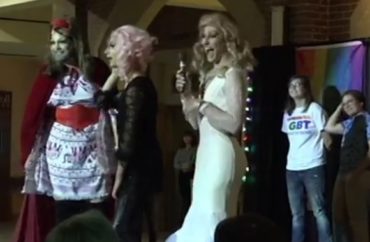 That is, until the student newspaper published a column criticizing the Jesuit school in Ohio for tolerating “sexual perversity,” and the Title IX office called in the young journalists for a meeting.

The “divisiveness” sparked by that episode led the administration to cancel the drag show for the foreseeable future last fall, and possibly break the law and its own accreditation in the process.

Months later, it looks like the administration is trying to retroactively shield itself from liability by changing the policy under which it could be sued for breach of contract and lose its accreditation.

It’s considering a revision to its “Speakers and Events” policy that would give the administration broad powers to disinvite speakers and cancel events on vague grounds of “public safety” and particularly “denigration” of its “Jesuit Catholic identity or mission.”

Other considerations include “other public safety concerns” (undefined), “potential disruption/obstruction” of university operations, and “a platform to denigrate or disrespect the Jesuit Catholic identity or mission of the University.”

The consideration with the biggest limitation on student speech: “grossly offensive” expression “on matters such as race, ethnicity, religion, sex, sexual orientation, or any other characteristic protected by applicable law or University policy.” Like much of the policy, these terms aren’t defined in any level of detail.

The ban on “grossly offensive” expression would probably mean conservative student groups couldn’t host so-called affirmative action bake sales, for example, despite these events consisting of purely political speech on a matter of public debate. Such an event drew a massive protest at the University of Texas in 2016 (below).

The draft policy not only gives the university the right to cancel speakers and events, but also to “relocate” and “reschedule” them – measures that would give administrators cover to impose onerous conditions on events while claiming to honor the expression of students.

The Foundation for Individual Rights in Education protested the draft policy in a letter to the university in March, warning that it gives administrators a blank check to censor students and their invited speakers on the basis of viewpoint.

If the Jesuit institution wants to go this route, it must revise much more foundational policies that give potential students the impression that JCU offers “approximately the same free speech rights” as they would get at a public university bound by the First Amendment, FIRE wrote. Its accreditation is also predicated on its commitment to “freedom of expression,” the civil liberties group noted.

Provost Steven Herbert responded to FIRE’s warning in an email late last month saying the university “respectfully disagrees” that the draft policy “violates its contractual obligations, policies or legal commitments, or its freedom of expression principles.”

According to FIRE, Herbert noted the draft policy only applies “outside the classroom setting,” meaning faculty and student expression for in-class activities remains protected, and he pointed to its “status as a private and Jesuit Catholic university.”

In a blog post last week, FIRE reiterated that legal precedent is running against JCU if students decide to sue. State courts in New York and Wisconsin have ruled against other private Catholic universities for violating speech-related contractual agreements with professors and students.

“As long as JCU maintains contradictory policies, it is violating its contractual obligations to its students” and exposing itself to “legal liability,” Alex Morey, editor-in-chief of FIRE’s Newsdesk, wrote in the post.

MORE: JCU may have broken the law, its accreditation by canceling drag show