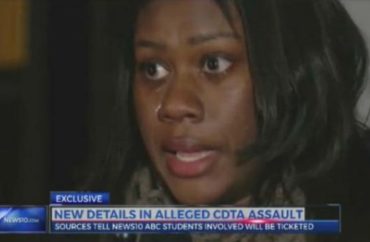 Asha Burwell got probation for falsely claiming to be a victim of a hate crime in 2016. Her lawyer argued in February that one of her convictions should be overturned on First Amendment grounds.

News 10 reports that the judges “determined that one of the convictions was based on posts made by Burwell on Twitter,” and those tweets did not cause “public alarm,” making them constitutionally protected.

Her conviction for lying to police, however, was upheld. The Albany County District Attorney’s Office thanked the appellate court for holding Burwell (middle, with co-defendants) accountable for her false 911 report: “While the Constitution protects your right to lie on Twitter, it certainly doesn’t protect your right to lie to the police.”

George Washington University Law Prof. John Banzhaf predicted the ruling would “encourage and embolden other students to likewise seek to stir up public unrest and even violence by falsely reporting hate crimes,” a practice that goes back to Tawana Brawley’s false claims in 1987.

In a lengthy analysis, the First Amendment expert notes Burwell’s overturned conviction was based on a law that bans “falsely reporting an incident” regardless of whether the criminal report is made to the government.

The trigger is whether the claim was made “under circumstances in which it is not unlikely that public alarm or inconvenience will result”:

Despite finding that “it was ‘not unlikely’ that defendant’s false tweets about a racial assault at a state university would cause public alarm,” the court nevertheless reversed her conviction under this statute because “criminalizing false speech requires either proof of specific harm to identifiable victims or a great likelihood of harm.”

Although it acknowledged that the defendant’s tweet triggered a “Twitter storm,” [the appellate court] opined that “[t]he remedy for speech that is false is speech that is true,” since, “by the very nature of social media, falsehoods can quickly and effectively be countered by truth, making the criminalizing of false speech on social media not ‘actually necessary’ to prevent alarm and inconvenience.”

Read the report and analysis.