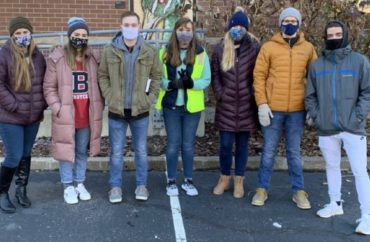 A pro-life student group at Boyce College in Kentucky remains steadfast in their mission “to be a voice for the vulnerable and voiceless,” according to the club’s president and other members that spoke to The College Fix.

“The 10:18 Society exists to be a voice and a hand for the vulnerable and voiceless,” Logan Prettyman told The Fix. “We exist to counsel abortion-minded women toward life and to mentor those in the orphan and foster care system.”

“The name 10:18 Society stems from the verse located in Deuteronomy 10:18. Our goal is to serve the orphan and the widow as Scripture commands,” Leah Woodall, one of the organization’s leaders, told The Fix, “We do this through pro-life and orphan care ministry.”

“He doth judgment to the fatherless and the widow, loveth the stranger, and giveth him food and raiment,” the Bible verse states.

Boyce students have continued their life-saving work despite a buffer zone around the EMW Surgical Women’s Center in downtown Louisville. It’s the last remaining abortion facility in the state.

The club told The Fix that the buffer zone consists of two yellow lines that are in addition to a white, no trespassing line. The facility created the border to allow women direct access to the doors.

“We are still able to speak with the women, and they continue to either ignore us or step out to listen,” Prettyman said.

If a sidewalk counselor is caught by camera inside the lines, the facility writes them up and they report the incident to the police department, he alleged.

The group counsels outside the abortion facility every Thursday and Saturday morning.

The facility has even instituted a shuttle service to try to get the women seeking abortions around the counselors without engagement. “We are working through what this new service means for how we engage the sidewalk but trust that through faith, hope, and love, God will use his people to save lives,” Prettyman said.

The Fix attempted to reach the abortion facility for comment on the recent buffer zone, but it deferred to Samuel Crankshaw with the ACLU. He has not responded to multiple phone calls in the past several weeks.

A pro-choice group also takes photos of the pro-life activists as they talk to women going into the facility. However, some students will try to calmly talk to the volunteers, sometimes called “clinic escorts,” who are there to assist the women from their car into the abortion facility.

The club’s stated mission to protect innocent human life keeps the pro-life students motivated: “From womb to tomb, we are for life, and our mission is to support the lives of the downtrodden for their flourishing.”

Prettyman says that the sidewalk counselors “trust that through faith, hope, and love, God will use his people to save lives.”

Wooddall, the student leader, shared with The College Fix her experience.

“Clinic escorts occasionally engage with the counselors. Safety is not normally an issue when it comes to the escorts; it is normally verbal,” she said.

“While I do believe they are in the wrong, I do realize that I am no better than them without Christ,” she told The Fix. “I also understand that we sometimes make mistakes when speaking with them.”

Thor Anderson, Woodall’s co-leader in the organization, told The Fix that the escorts are instructed to avoid speaking with the sidewalk counselors.

“This ministry exposes us to a lot of anger and passion coming from both sides, and because we are still sinners, we still make mistakes,” she said.

Editor’s note: The author was previously involved with the 10:18 Society.