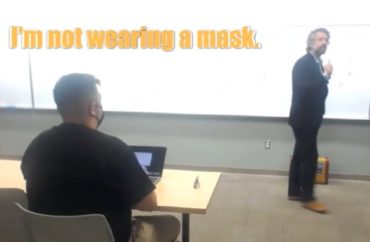 A New Mexico State University professor remains on paid leave as of September 14 after he refused to comply with the school’s COVID mandates.

Business law Professor David Clements (right) said on August 23 he had been placed on administrative leave after he made comments in one of his classes and posted a video of himself saying he refused to be a “guinea pig.” The public university requires all faculty to get vaccinated or submit to weekly testing. Everyone must wear a mask, too.

The suspension with pay came just a few days after he had won an award from the business school for teaching excellence. He said in the video he did not attend the ceremony because it required him to wear a mask.

Director of Media Relations Minerva Baumann told The College Fix via email on August 27 that Clements is still employed at the university. When asked if the university had a comment on the issue or planned on reaching a compromise with the professor, Baumann said NMSU “does not comment on personnel matters.”

She did not respond to a September 14 email that asked for confirmation he is still on paid leave.

The Fix reached out to Clements multiple times via his university email within the past two weeks asking the professor for further comment, but did not receive a response. On September 13, he posted a response letter to NMSU that indicated he plans to wage a legal battle against the school.

“I will not wear a mask,” Clements said in the video, posted on his Rumble video channel. “I will not take an experimental drug, it will not happen.”

“I will not be a lab rat,” he said, explaining why he also refused the mandatory testing. He told students they were welcome to wear masks in his class. He also said he would make the class available online if students felt uncomfortable. Several students can be heard leaving the classroom during Clements’ lecture.

On his Telegram channel, “The Professor’s Record,” Clements wrote that he “expects the media and Marxist faculty to continue to distort the truth and create the perception that I am a no-good deplorable.”

He added that he had been provided with a ‘notice of emergency suspension pending outcome of further review” by the university.

“Under the suspension, effective immediately, I am ‘prohibited from entering onto any NMSU property, due to a risk of imminent harm to students, faculty, and staff of NMSU, based on reports of persistent and repeated acts and omissions,” Clements said.

He said he is also barred “from attempting to hold any class meeting or contacting any current NMSU student, including teaching any course whether on campus or online.”

The business professor said the university told him it is considering disciplinary action that could result in suspension without pay or termination following the investigation.

He provided an update on Sept. 6, writing he has been “threatened with the possibility of disbarment.”

“I have been removed from the University, pending a final disposition,” Clements said.