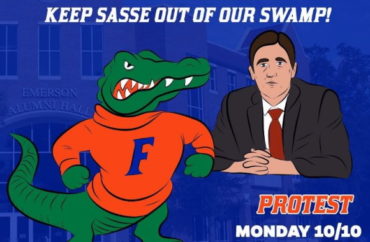 Within 24 hours of the news that Republican U.S. Senator Ben Sasse is slated to resign and likely take the helm of the University of Florida, several left-leaning student groups quickly denounced the development and demanded it be reversed.

A campus protest is scheduled for Monday, the same day Sasse is scheduled to be on campus to talk to faculty, staff and students as part of the hiring process.

The Young Democratic Socialists chapter at UF posted on Instagram about the protest, stating: “FUCH THE REPLACEMENT! Join us in protesting against the announcement of Dr. Ben Sasse as the sole finalist as UF’s next president.”

Currently, Kent Fuchs is the president of the University of Florida, which enrolls about 35,000 undergrad students.

Although Sasse, who represents Nebraska, was one of the handful of Republican senators who voted to convict former President Donald Trump at his second impeachment trial, the UF College Democrats also published a statement Friday that denounced the choice.

“Senator Sasse is an outspoken anti-gun control, anti-choice, anti-academic freedom, and anti-LGBTQ+ politician,” the group stated on Instagram. “This selection does not reflect the diversity of our Gainesville and University of Florida community and blatantly harms the communities UF claims to value.”

The College Democrats also claim Sasse will serve “as a puppet” for Florida Republican Gov. Ron DeSantis and encouraged its members to join the protest.

“Political influence that dismantles academic freedom and actively attacks our student body has no place in our educational institutions. The University of Florida College Democrats strongly condemns the recommendation of Ben Sasse and will not stand for his approval,” the group stated. 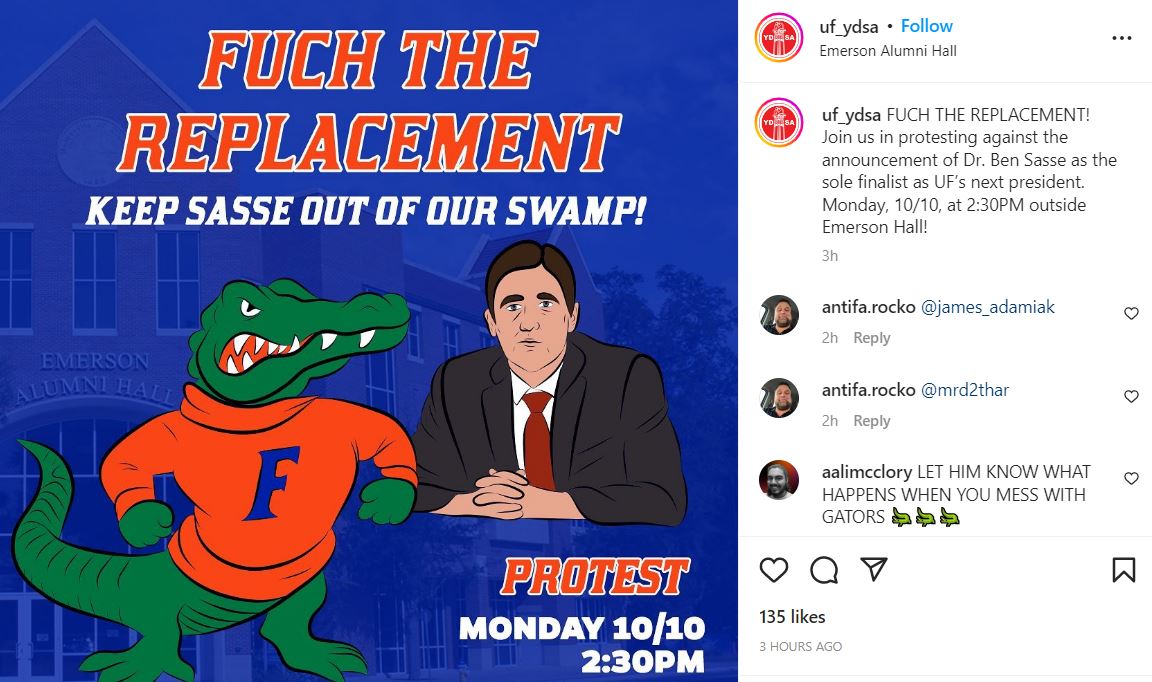 “This decision is met with indignation from the student body as Ben Sasse has political views that do not align with the values that the students at the University of Florida hold. They are discriminatory and non-representative of our student population,” states the petition, which had nearly 400 signatures as of Friday evening.

Sasse is the sole candidate and is expected to resign to take the helm as president of the University of Florida if its leaders officially offer him the position.

The University of Florida Presidential Search Committee unanimously recommended him as the sole finalist for consideration by its Board of Trustees, according to a news release published Thursday by the university.

The UF Board of Trustees will formally consider Sasse’s candidacy at its meeting Nov. 1, the university tweeted Thursday.

Asked to weigh in on the visceral response among student Democrats on campus, Matt Turner, the president of the University of Florida College Republicans, said it seems reactionary.

“Senator Sasse seems to have several qualities that would make him an effective president for all students, regardless of their political affiliation,” Turner told The College Fix on Friday.

“But as it stands now, there is already a protest being organized to oppose the senator without any reason other than the fact that he is a Republican. Protesting somebody purely because there is an ‘R’ next to their name cuts directly against the principles of tolerance and merit-based evaluation that this university used to stand for. The members of my organization have certainly felt this degradation, and it needs to end,” Turner said.

Asked about the planned campus protest Monday, campus spokesperson Cynthia Roldán Hernández told The College Fix in an email late Friday the university has no comment.