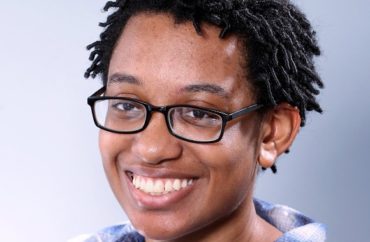 ‘We do not want to be baby-sat’ by Princeton administrators

To those who believe free speech advocacy is just for straight white men, Rebekah Adams has a message: Look at me.

“When you are Black, queer and a woman, and you stand against the norm, you have to expect condemnation from your own group or race who will call you out as a traitor or a sellout,” Adams (above) told The College Fix in an email.

It’s important for students to “see a minority, on their own volition, stand up for” free speech and academic freedom, she continued, because “it breaks that false narrative” that only white men on campus defend those values.

Adams wants to continue in the lineage of abolitionists, suffragettes and LGBT activists who used free speech to advance their causes: “We do not want to be baby-sat[]” by Princeton administrators.

The group “has many plans” for the spring semester and beyond, according to Adams, whose career goal is to become a biomedical engineer, research scientist and astronaut.

POCC is publishing podcasts with “scholars and experts” on First Amendment rights and their application to race, activism and “LGBT equality,” for example. The podcasts also cover “controversial/taboo subjects” with students and faculty.

It’s hosting “open discussion” events with other Princeton organizations such as the James Madison Program, led by Prof. Robert George, who himself was recently targeted for his Twitter poll on gender pronouns.

‘Silence is often perceived as acquiescence’

Initially formed three years ago along with several other “Open Campus” groups, the Princeton coalition did not receive a warm welcome when students revived the group this past summer.

As a result they faced public vilification as “Nazi collaborators,” “fascists” and “racists,” with some students going so far as to obtain members’ photographs from secure university websites and attempt to dox them on social media.

Adams and Akhil Rajasekar (below), her predecessor as POCC president, punched back in a Newsweek op-ed shortly after winning the Heterodox Academy award last month.

They assailed the “rising threat to academic freedom” from “woke mobs” at Princeton and other elite schools, excoriating Princeton for “succumbing to a pressure campaign” to rename its Woodrow Wilson School of Public and International Affairs. The duo denounced administrators for promising to investigate a professor who harshly criticized a black student activist group.

Adams credited Rajasekar with “reignit[ing]” her “zeal for standing up for academic freedom” from high school when he published the open letter to Eisgruber. “It resonated with me so I signed it and joined POCC that day,” she told The Fix.

She then wrote a Daily Princetonian op-ed with Bella Hubble, a POCC member with Vietnamese-Cuban heritage, to debunk “the proposed narrative that we are a monolithic group posing as victims.”

Rajasekar told The Fix it was essential for the administration to “hear from students in support of academic freedom” so it didn’t assume “pressure was unilaterally in support of the student protestors’ demands.”

Even in the face of widespread “woke” opposition and scorn from fellow students, “academic freedom is worth defending” through gentle but persistent advocacy, he wrote in an email. “Silence is often perceived as acquiescence, and much can be done by not being silent.”

Heterodox Academy, an academic group that promotes constructive disagreement on campus, gave the Princeton coalition its “Outstanding Student Group” award for its “past and present” efforts to bring open inquiry to Princeton. It said several HxA members nominated POCC.

An environment marked by viewpoint diversity “highlights that each person is unique in their humanity,” the student group answered the HxA questionnaire.

Students lose “the potential to learn and understand nuances” when they don’t hear opposing views, as well as the opportunity to build “humility, compassion and a common understanding of the inherent worth” of opponents,” the coalition said.

Many Princeton students don’t have the same rosy view of POCC, however, according to Adams and Rajasekar.

They often deride the group as “partisan,” “monolithic,” “full of conservatives” and even “white supremacist,” Adams told The Fix, due to its public stances against mandatory “unconscious bias” trainings and “anti-racist” curriculum changes.

Rajasekar added that the “nature” of POCC’s work defending free speech “brings with it some opposition” from the student body.

The group earned the enmity of peers this summer by calling the radical student demands “a concerted siege of free thought at Princeton,” using the campus bureaucracy to “create a monopoly for their beliefs on deeply controversial and contentious issues.”

Images of their student identification cards were circulated in a Princeton student Facebook group, where they were slurred by their peers. One of the 22 signatories of the POCC letter told The Fix at the time that many other students were afraid to sign it for fear of losing friendships and job prospects.

They also condemned attempts by faculty, academic departments and the administration to rebuke and punish a professor who dissented from the “illiberal” demands made by protesters.

“The ‘woke’ mobs seem strong, but they do not speak for everyone,” Adams and Rajasekar wrote. “If university administrators only ever feel their pressure and hear their demands, they may succumb to an illusion of unanimity.”

That’s why it’s so troubling that more than half of students in a large national survey said they regularly self-censored for fear of how others would respond. “Universities where students and professors feel uncomfortable asking challenging questions dismally fail their communities,” the duo wrote.

Adams noted to The Fix that The Daily Princetonian presumed to conduct a “fact-check” on the op-ed.

Managing Editor Benjamin Ball, who is white, tweeted the original analysis, calling the op-ed by nonwhite students “irresponsible.” Copy editors praised his thread for its “ethics check” on Adams and Rajasekar, and the newspaper itself said Ball was adding “context.”

Even Princeton’s spokesman Ben Chang tweeted in support of the “fact-check,” thanking Ball for the “level-set.”

Howdy friends! A quick thread offering a fact-check of this op-ed that appeared in Newsweek written by a few of my peers at the helm of the Princeton Open Campus Coalition: 1/8https://t.co/CRUQobqg2y

As the U. spokesperson, i appreciate @wbenball's fact-check and level-set in this thread ⬇️ https://t.co/wknuKD2wbT

It was an “absolute honor” that former New York Times columnist Bari Weiss shared the op-ed, Adams told The Fix.

Their goal with the op-ed was to encourage students nationwide, not just at Princeton, to raise their voices, according to Adams. Tenured faculty have greater leeway to defend free speech because they “do not have to worry about professional repercussions from expressing their opinions,” just “social ostracization” and shaming.

Students, on the other hand, fear losing career opportunities and internships. That’s why “we took it upon ourselves to be a role model to them that in spite of slings and arrows or the tough battle ahead, at the end of the day, it will be worth it,” she said.

While many of the coalition’s “positions/stances are misconstrued and seen as a hindrance to progress,” the POCC exists solely to “remind the University of its role regarding free speech,” Adams said.

She noted Princeton’s promises to defend freedom of expression, as confirmed by its adoption of the Chicago Principles in 2015. The student group’s goal is to make certain that the “free speech rights of all students and faculty are protected.”

The only force that stops the insanity is people willing to say no. Thank you @AkhilRajasekar and Rebekah Adams! https://t.co/2ESPTiXGFd

About the Author
Matthew Wilson
College Fix contributor Matthew Wilson is a student at Princeton University, where he's planning to pursue a concentration in the School of Public and International Affairs. He serves as chair of the Cliosophic Society, Princeton's conservative debate union, and he writes for The Princeton Tory.