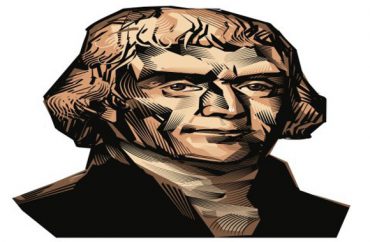 In an example of what could be the next phase of the current Black Lives Matter protests sweeping the country, students at the University of Missouri are — once again — calling for the removal of a Thomas Jefferson statue.

Mizzou sophomore Roman Leapheart told KOMU he began a Change.org petition because he “just had something that was bothering” him.

“We’re not enslaved anymore, but then you have to see someone who enslaved your ancestors, and it’s kind of like you’re kicking a horse when it’s down,” Leapheart said.

Mizzou students tried to get the Jefferson statue taken down five years ago during the racial upheaval which had wracked the campus. They said the statue is “offensive, oppressive, and celebrates a ‘racist rapist.’” When a group of conservative students had defended the statue, they were dubbed “literally the epitome of privilege” and were accused of “celebrat[ing] a predatory slave owner.”

The new petition states “Mizzou has no room for a racist slave owner on our campus, in the Quad, where thousands of black students pass by everyday.”

Interestingly, Leapheart must have slept through a few history classes because he refers to the TJ statue as a “Confederate monument.”

From the KOMU story:

That [2015] petition didn’t gain the traction that this one is, and Leapheart said that’s because of the leadership at the university.

“We didn’t have leadership that listened in 2015, and that’s evident based off of everything that happened,” he said.

Even though it’s been five years since that initial petition, Leapheart says now is the right time to bring this back up.

“I think now is the right time to bring this back up because this is one of the first, easiest steps,” he said. “Honestly to start righting the wrongs they did in 2015.”

MU spokesperson Christian Basi confirmed they are aware of the petition, but they haven’t decided what the next steps in addressing it are.

Even if the petition doesn’t end up going anywhere, Leapheart said he has to try.

“If I give up, if everyone else just gives up, then what was the point in even starting this if I was going to give up?” he asked.

Comments to the petition include “I’m tired of seeing monuments of oppression,” “It’s time to eradicate all things racist,” and “We need to stop glorifying the slave owners and rapists of our past.”

The petition currently has a bit over half of its 5,000 signature goal.

Read the KOMU article and petition.