He spoke in the name of the St. Louis County chapter of the National Association for the Advancement of Colored People, where he serves as president.

Now he’s in trouble with the national organization for putting it on the wrong side of the issue.

NAACP President and CEO Derrick Johnson told Gaskin in a Thursday letter that he was contradicting NAACP policy on the implementation of Title IX. Johnson cited the national organization’s public comments against Education Secretary Betsy DeVos’s* proposed Title IX regulation, the subject of a public rulemaking.

The DeVos proposal “would have largely the same effects as the proposed Missouri legislation,” which “would make it more difficult for survivors of sexual assault at Missouri’s state universities to come forward with their claims and have them adjudicated,” Johnson claimed:

Moreover, it appears from the evidence we have received that you took this position without having consulted with the leadership of the Missouri State Conference or other units in the State, despite the fact that the proposed legislation would apply to all public universities in Missouri.

The NAACP leader also accused Gaskin of taking this position without getting approval from the St. Louis chapter’s executive committee, “in apparent violation of the NAACP’s Bylaws for Units.”

Johnson made unrelated accusations against Gaskin for his “apparent conflict of interest” in merger discussions with the St. Louis City chapter of the NAACP:

Johnson is suspending Gaskin effective immediately and ordering him to stop using his NAACP title. Gaskin can request a hearing on the allegations against him. 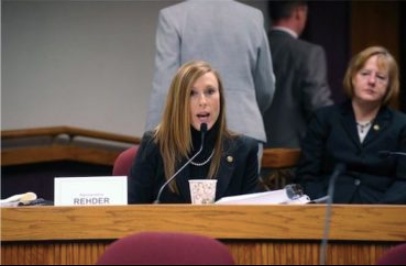 The St. Louis Post-Dispatch has not covered the legislation objectively. In his report on Gaskin’s suspension, metro columnist Tony Messenger claimed the legislation – which is sponsored by a sexual-assault victim, Rep. Holly Rehder (left) – “would weaken Title IX protections for women on college campuses.”

The purported protections – restrictions on the ability of accused students of all genders to defend themselves against university lawyers – have already been rescinded by DeVos at the federal level.

Several courts nationwide, both appellate and district, have struck down practices mandated or encouraged by the Obama administration’s Title IX guidance, which was never formalized in a rulemaking. The 8th U.S. Circuit Court of Appeals, which has jurisdiction over Missouri, has explicitly rejected broad interpretations of Title IX regulations at least twice in recent years.

Johnson’s letter to Gaskin was shared with the Post-Dispatch by Missouri NAACP President Rod Chapel. In a text, Gaskin said it was an “internal NAACP matter” and he would have “more to share next week following conversations with the leadership of my Branch.”

Read the letter and article.