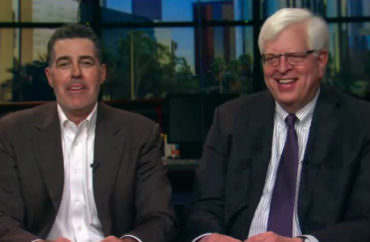 Millennials are terrible at heckling

As college students increasingly try to shut down viewpoints with which they disagree, one Democratic member of Congress fears they are botching the “fine art of heckling.”

During the campaign debates between Abraham Lincoln and Stephen Douglas, people would heckle and it would be incorporated into the debate, Maryland Rep. Jamie Raskin said at a House Oversight Committee hearing on campus free speech Thursday.

Nowadays, heckling is “getting a bullhorn and shouting somebody down, which is stupid,” said the former constitutional law professor at American University, going so far as to call it “a blunder of this generation.”

While all members of the two subcommittees that held the joint hearing agreed that speech must be protected, especially when it’s unpopular, the Democrats warned that a resurgent white supremacism was taking advantage of free speech.

‘Very dangerous territory when we start identifying speech as violence’

The hearing, chaired by Republican Rep. Jim Jordan of Ohio, began with a series of video clips highlighting various confrontations that have plagued conservative speakers on campus in recent years.

One of those was a disruptive campus protest against conservative pundit Ben Shapiro, one of five witnesses at Thursday’s hearing, whose event organizers are sometimes censored or threatened.

He told lawmakers that three groups are responsible for the violence and suppression of speech: a small collection of college professors, the student organizers and activists, and outside groups such as Antifa, whose activists use black-bloc tactics to evade arrest.

The opposition of protesters boils down to their view that “the validity of an argument can be judged solely by the ethnic, sexual, racial, or cultural identity of the person making the argument,” he said, and that “physical violence is sometimes justified in order to stop verbal violence” – in other words, disagreeing with an argument.

He mentioned a professor at California State University-Los Angeles, the site of the most disruptive protest against Shapiro, who “threatened students who sponsored me by offering to fight them” and said “the best response to micro-aggression is macro-aggression.”

In response to discussions about speech codes at the hearing, Shapiro said the First Amendment should be a sufficient speech code. Otherwise people are “moving into very dangerous territory when we start identifying speech as violence.”

Shapiro, however, made clear his tolerance for private universities restricting speech and controlling who can enter campus. He told Raskin, the former professor, that he promptly left DePaul University after it threatened him with arrest but “I would have stayed and been arrested” at the public Cal State LA.

Even though Carolla is making the documentary No Safe Spaces about campus censorship and the rise of microaggressions, the comedian said he’s wary of a government solution to the problem.

In a surprising exchange with Republican Rep. Ronald DeSantis of Florida, Carolla said “all of these problems that we are talking about, free speech, hating other people, drug addiction, violence, crime, it all stems from the family, and when the family is intact, much of this stuff just goes away.”

Sprinkling his testimony with jokes that made the main and overflow audiences laugh – at one point bragging about his tolerance for Taylor Swift’s music – Carolla said the culture needs to change before the law: “We need adults to start acting like adults.”

In response to Raskin’s lament about low-quality heckling among millennials, the atheist Carolla said he often jokes about Jews with his devout Jewish documentary partner, Dennis Prager.

Busting chops and heckling is an expression of friendship but “doing it to a stranger on a college campus is much different,” Carolla conceded to Raskin.

While Republicans focused their statements and questioning on censorship and violent left-wing groups, Democrats highlighted racial issues such as the banana-noose incident this spring at American University.

The nooses were presumed to be targeting Taylor Dumpson, a black woman and newly elected student government president who belongs to an African American sorority. She was in the audience at the hearing.

Chairman Jordan also recognized Dumpson, calling what happened to her “disgusting.” But he said students at AU were probably required to take some sort of diversity or bias training, asking Shapiro if such trainings are helpful.

They are actually counterproductive, Shapiro replied, because it “alienates people who feel like ‘I’m not a racist, why am I being forced to endure the implication that I am a racist and have a necessity of undergoing bias training.’” The kind of people who tie nooses around bananas are “garbage human beings” who won’t change their behavior.

With Democrats on the committee focusing on white supremacy and anti-semitism, the devout Jew Shapiro noted that the Anti-Defamation League identified him as the number one target of anti-semitism online in 2016.

“I have a trophy in my house that says number one hated Jew in America,” he quipped.

Carolla and Shapiro were not available for interviews following the hearing.

A current official from Evergreen should have shown up

The most contentious part of the hearing was perhaps the questioning led by House Freedom Caucus Chairman Mark Meadows, Republican of North Carolina.

Speaking to witness Michael Zimmerman, the former provost at the notorious Evergreen State College, Meadows pointed to the millions of dollars in federal student aid given to Evergreen each year.

Zimmerman agreed with Meadows that his former employer was “getting it wrong” with its tepid response to student activists who cornered and threatened Prof. Bret Weinstein for criticizing the school’s encouragement of white people to leave campus for a day.

Meadows immediately asked Zimmerman if the college had taken bad advice when its officials said “that a member of Congress had told them they shouldn’t appear before the Oversight Committee to defend their position.” The former provost answered that “it’s not for me to say.”

Meadows also had a tense exchange with Anti-Defamation League National Commissioner Frederick Lawrence about a decision during his presidency at Brandeis University: the withdrawal of an offer to give an honorary degree to human rights activist Ayaan Hirsi Ali, a fierce critic of political Islam.

Asked if that withdrawal was the correct decision, Lawrence said it was because it was “not a free speech issue” but rather a response to Ali’s statements on Islam, which are inconsistent with the values of the university.