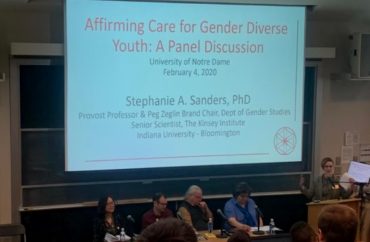 The University of Notre Dame on Tuesday hosted a panel of experts who asserted that it is beneficial to young people, even children as young as five, to affirm their gender dysphoria and then to help them medically transition at the right age.

“If a child tells you who they are, that’s who they are,” said J. Dennis Fortenberry, chief and professor of adolescent medicine at the Indiana University School of Medicine.

The event was held in direct response to a panel critical of transgender medicine hosted last fall by the campus group Students for Child-Oriented Policy. As organizers of the pro-transitioning panel kicked off Tuesday’s discussion, they claimed last fall’s SCOP event was based on “disinformation and pseudoscience.”

Asked to respond, Ellie Gardey*, co-president of Students for Child-Oriented Policy, told The College Fix via email the lecture last fall “featured a professor of endocrinology and a medical doctor who used scientific studies to discuss the effects of cross-sex hormones and puberty-blockers on children.” 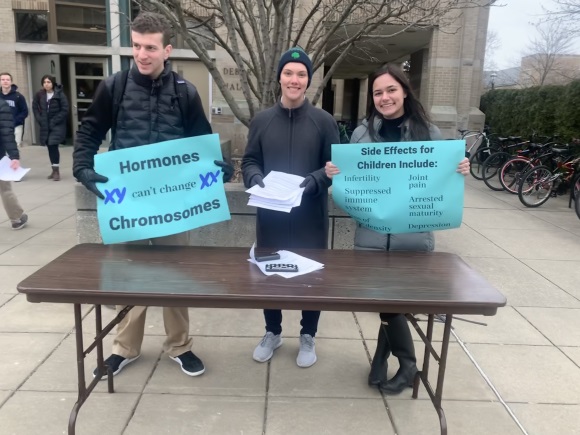 Some members of SCOP tabled ahead of Tuesday’s panel with signs stating “hormones can’t change chromosomes” and a list of the negative effects of hormone and gender-transition therapies on children. But inside the event, panelists sang the praises of transition treatments.

She said gender identity is “what we know about ourself inside.”

Fortenberry, in introducing himself, told the audience: “You still don’t know what my genitals look like, and I am not going to tell you.” He went on to say gender dysphoria “never goes away,” and argued children as young as three can exhibit such behavior.

Referring to giving children puberty-blockers and cross-sex hormones, he said “this is not something about which there is controversy.”

In response, Gardey, who attended the event, said panel members “neglected to even mention the dangerous effects of puberty-blocking drugs and cross-sex hormones on children: infertility, arrested sexual maturity, loss of bone density, depression, and affected brain development, to name a few.”

Notre Dame’s media affairs division did not respond to a request from The College Fix seeking comment on Wednesday.