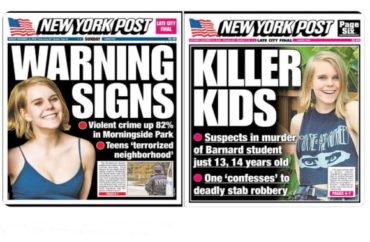 Last spring, a black Columbia University student was “physically restrained” by campus cops after he refused to show them his ID. Students at both Columbia and its sister campus, Barnard College, are required to show student IDs to enter campus buildings after 11 p.m.

The incident led to charges of racism, racial profiling, and the suspension of not only the officers involved, but their chief as well. During the height of one of the protests, student demonstrators chanted “no justice, no peace, fuck these racist police” and “public safety is anti-black.”

Fast forward to Sunday night at a vigil to mourn the recent brutal stabbing death of Barnard College freshman Tessa Majors, who was killed near campus.

Many of those gathered cheered as local politicians called for more cops in the park, the Columbia Spectator reports. And the New York Post also recently reported that while students at the two New York City institutions have often demanded de-policing measures, now several want more cops around in the wake of the murder.

“Students at the liberal colleges — who have long decried undercover police presence on campus and NYPD enforcement at protests — have begun calling for more cops in the wake of last week’s shocking murder in adjacent Morningside Park,” the Post reported.

One Columbia student, 22-year-old political science major Andrew Lotharian, told the Post: “We need more policing for safety. My friends and I see people who are definitely not Columbia students smoking I-don’t-know-what on campus. There was a guy who had his genitals out in front of the freshmen dorms.”

And Columbia student Danielle Mikaelian told the Post that tensions last spring had led “to a lot of calls to decrease policing on campus,” but now she at least welcomes cops on campus. “I care about my safety and I believe there are methods of policing without discrimination.”

It was very moving to see so many New Yorkers of different backgrounds come together for a candlelight vigil to mourn the tragic death of Tessa Majors, an 18-year-old Barnard College student who was murdered in Morningside Park in recent days. pic.twitter.com/mMyIbwz9jB

According to police, Majors, 18, was beaten and stabbed by a group of teenage boys at around 5:30 p.m. in or near Morningside Park flanking her campus. A 13-year-old has been arrested and charged with her murder, NBC reports, adding: “Majors, who grew up in Virginia, enjoyed music, played bass guitar and was considering a career in journalism.”

While some students may finally begin to openly support cops, there is still a fair amount of politically correct chatter surrounding the case.

The Columbia Spectator reports some are expressing pity for the suspects in the crime, and claim the murder is the result of not enough after-school programs:

According to City Council member Ydanis Rodriguez, the discrepancy in wealth between Columbia and its surroundings in the West Harlem area should prompt people to think about the responsibilities elite institutions have to invest in the communities they occupy.

Columbia’s Katherine Franke, a professor of law, gender, and sexuality studies, posted on Facebook she thinks Majors’ murder is about “the University’s failure to address urban violence without policing.”

“It just feels like something is terribly broken here,” Franke said. “These are all kids, Tessa and the kids in the park. It’s all just so heartbreaking. We have failed them all.”

Meanwhile, others on Twitter lay blame on police and university officials for not doing enough.

When Yu went to the NYPD to report the incident, he was told “several people” had been robbed at the same place “by the same teenagers” but cops couldn’t do much about it because “they aren’t adults.”

“I lived 1 block from #morningsidepark for 15yrs. Blame @NYCMayor who doesn’t prosecute crimes, @NYPD28Pct who knows this park is a disaster & @Columbia who has billions in endowment & won’t post guards every hundred feet in this shithole. #TessaMajors,” tweeted Alexander Sicular.

Meanwhile a top officer has claimed Majors was purchasing marijuana when she was murdered. That prompted others on Twitter to respond that even if it is true it’s irrelevant, and also that cops have known Morningside Park is a open pot market and have looked the other way.