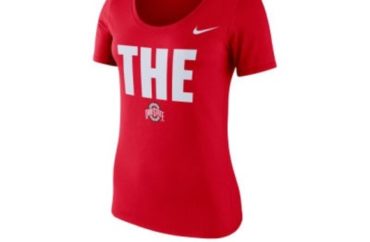 Most people would probably laugh at Ohio State University’s trademark application for the word “THE” in capital letters.

It’s the best example of the taxpayer-funded institution’s cultish belief that it is the most perfect, unique snowflake in higher ed (“THE Ohio State University”). Another example: its extortion attempts against bakeries that take sports-themed orders.

But trademark reviewers take these unintentional-joke applications seriously, and rendered a preliminary verdict this week, The Plain Dealer reports.

The “office action” letter from the U.S. Patent and Trademark Office provides two grounds for rejection. The first is that the fashion brand Marc Jacobs sought to trademark “the” three months before Ohio State filed its application. (The Marc Jacobs application suffered a technical snafu last month.)

The size, location, dominance, and significance of the alleged mark [“THE”] as used on the goods are all relevant factors in determining the commercial impression of the applied-for mark.

With respect to clothing, consumers may recognize small designs or discrete wording as trademarks, rather than as merely ornamental features, when located, for example, on the pocket or breast area of a shirt. Consumers may not, however, perceive larger designs or slogans as trademarks when such matter is prominently displayed across the front of a t-shirt.

The university couldn’t resist making “THE” take up the bulk of the shirt and hat on proposed Ohio State-branded clothing, and the mark is so large “that it dominates the overall appearance of the goods,” the letter explains.

That makes it “merely decorative” and leads consumers to view the mark as “having little or no particular source-identifying significance” – in other words, the connection to Ohio State is too tenuous.

Given that the PTO communication is a “nonfinal office action,” the university can appeal the decision on a few grounds. A spokesperson played down the PTO letter as “not unusual” in a statement to the Plain Dealer.