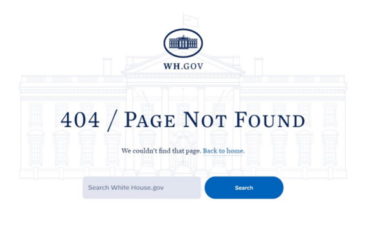 As President Joe Biden was sworn into office Wednesday, his team removed a report detailing the history of America’s founding from the White House’s website.

A commission convened last fall by President Donald Trump that aimed to advance what he called a patriotic education and take on leftists’ argument that America was never great released its report Monday.

Now when people click on the link to read the report an error 404 “page not found” message pops up.

The 45-page report by the 1776 Commission was billed by the White House as “a definitive chronicle of the American founding, a powerful description of the effect the principles of the Declaration of Independence have had on this Nation’s history, and a dispositive rebuttal of reckless ‘re-education’ attempts that seek to reframe American history around the idea that the United States is not an exceptional country but an evil one.”

It listed challenges to America’s founding principles as slavery, progressivism, fascism, communism, racism and identity politics, and called for the rejection of “any curriculum that promotes one-sided partisan opinions, activist propaganda, or factional ideologies that demean America’s heritage, dishonor our heroes, or deny our principles.”

On Monday, the report was a trending topic on Twitter, drawing ridicule and scorn from professors and liberal activists. The report’s absence was quickly noticed on Wednesday. “lol they already removed the 1776 Report,” tweeted pundit Michael Cernovich.

Many copies of the report were already downloaded, however, including one obtained by The College Fix.

One of the report’s authors, former Vanderbilt University law Professor Carol Swain, who was also a Black Voices for Trump advisory board member, noted the report is also available at Be The People.

You can download the 1776 Commission Report from my Be the People Project site. #1776Commission https://t.co/tUN1q0v3BY

The commission’s report is also seen as a rebuttal to the New York Times’ heavily criticized and partially debunked 1619 project, which argues the American Revolution was fought in part to maintain slavery and that Abraham Lincoln was racist.