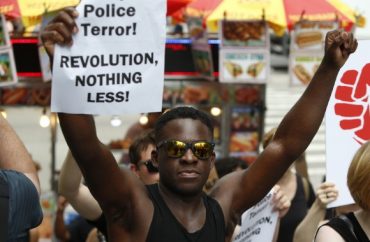 A day after the worst attack on U.S. law enforcement since 9/11 – with five officers killed and seven injured in Dallas by a racially charged anti-police terrorist – Emory University Senior Vice President and Dean of Campus Life Ajay Nair decided it was the appropriate time to promote the divisive Black Lives Matter movement and highlight the school’s ongoing efforts to laud and support its aims.

Nair’s 300 word memo to students dated July 8 did not mention the murdered police officers specifically, did not honor their heroics, or mourn their passing. The email to students very vaguely referred to the police massacre in this throwaway line: “Too many lives have been lost in just the past several days in Baton Rouge, Falcon Heights, and Dallas.”

Instead the memo was almost entirely spent showcasing Emory’s effort to “dismantle racism” and push “social justice” and offer an “inclusive community.”

“Here at Emory, we must do our part to dismantle racism and other forms of social oppression on our campus, and we must work to transform our communities wherever we reside. Otherwise, we are complicit in the persistent and pervasive wrongs that occur far too often throughout our country and the world,” Nair wrote.

“How and why we practice community on our campus matters. Last fall, as an outgrowth of the Black Lives Matter movement at Emory, students, faculty, and staff embarked on a great experiment to reimagine our institution. As a result, Emory is dedicating unprecedented resources to addressing issues of social justice,” Nair’s message continued.

Dismayed that my university’s first mention of the Dallas attack was to highlight Black Lives Matter, I checked Emory’s Twitter feed to see if I missed a message of support or mourning. Nothing. Not one word.

But Nair was so quick to remind us “we must – as a society – confront our nation’s historic, systemic, and undeniable racial injustice.” Reading the memo, I felt disturbed that Dean Nair would focus on promoting Black Lives Matter and highlight the university’s recently established Commission on Racial and Social Justice while seemingly disregarding law enforcement’s losses and woes. Dean Nair regularly sends emails to Emory students after tragedies, but in this instance apparently did not feel it worth offering condolences for the five heroic officers who gave their lives in the line of duty — ironically while protecting Black Lives Matter protesters.

Not one word was issued in his address to the Emory community to honor the fathers, veterans and brave public servants that were Brent Thompson, Lorne Ahrens, Patrick Zamarripa, Michael Smith and Michael Krol.

I understand the United States, like every other country, faces challenges. If the deaths in Louisiana and Minnesota turn out to be aggressive abuses of the law by police, then the officers should be prosecuted to the fullest extent and the punishment should fit the crime.

However, for Dean Nair to not show any support for American law enforcement and exhibit absolutely zero empathy for the heroic officers in Dallas while at the same time promoting the chaos created by the Black Lives Matter movement he has shown he is not capable of leading an institution of higher learning.

Adding insult to injury, while the lives of black Americans matter – just as the lives of every other racial group matter – the memo to students promoted the false narrative of the Black Lives Matter movement: that it aims to promote unity and equality.

This is not the case. The group has stoked racial tension by misrepresenting the statistics of police killings of black Americans and has promoted a dangerous anti-cop message across the country.

In fact, a recent study from Harvard professor Roland Fryer found that there is no racial bias whatsoever in police shooting cases even as police are forced to engage at greater rates in urban communities. Black Lives Matter does not present this reality and they consistently fail to express the importance of respect for law enforcement and the critical message of never to resist arrest.

Nair has proven that as dean he is only interested in representing one set of ideals, and if a student supports the sacrifices of American law enforcement, they are deemed irrelevant. He should recuse himself from the position and step down.