Antisemitism is still a major problem on American college campuses, according to a group of participants in an online roundtable held Thursday by the Endowment for Middle East Truth.

Each of the panelists condemned the “orthodoxy” on campuses that posits Jews and Israel as being “racist” and “colonialist.”

Romirowsky said the purging of pro-Zionist views on campus was akin to “cancel culture,” adding that “the only form of hate speech that is accepted within cancel culture is, of course, antisemitism.”

Romirowsky said the adaptation of Palestinian propaganda has been replacing scholarship in schools across the nation. He specifically cited Columbia University, where the student government recently approved a referendum to divest the school of all investments related to Israel, and which once hosted Iranian President Mahmoud Ahmadinejad for a speech on campus. 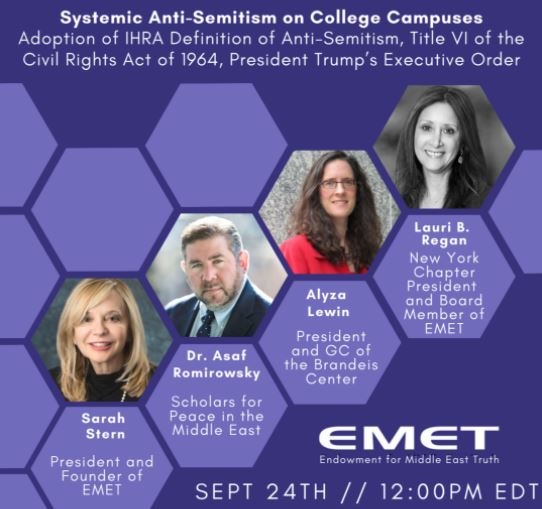 Multiple panelists cited the case at the University of Southern California of Jewish student Rose Ritch, who was harassed to the point where she had to resign as vice president of the undergraduate student government. An outspoken proponent of Israel’s right to exist as a Jewish state, Ritch was the target of an online effort by the Black Student Assembly to “impeach her Zionist ass.”

“Universities should be places of the exchange of ideas and discourse, and that is not happening,” Romirowsky said. He added the anti-Israel efforts on campus are “directly out of the PLO playbook,” which uses “agents of influence or soft power, and that is done through journalism and academia.”

MORE: Examples of anti-Semitism on campuses abound — enough is enough

Alyza Lewin, president of the Louis D. Brandeis Center, emphasized that antisemitism is a long-standing practice that predates even the creation of Israel.

“Antisemitism looks a little different in each generation – it morphs,” said Lewin. And the one and only constant when it comes to antisemitism is that antisemitism always seeks to pin whatever that generation’s greatest evil on the Jew,” she said.

“Antisemitism always seeks to demonize, marginalize, ostracize, exclude, or today, cancel, the Jew,” said Lewin. “The implication is, that if only the Jews would disappear, the world would be a better place.”

Lewin noted that today’s greatest evil is racism, along with settler apartheid and colonialism – just the things Jews as a collective are now being accused of.

According to Lewin, this applies most notably to Israel.

“The one and true democracy in the Middle East, the one place in that region of the world where all faiths, all races, all ethnicities, all genders are equal under the law, that one country – the Jewish homeland – is singled out and demonized,” Lewin said.

Sarah Stern, founder and president of the Endowment for Middle East Truth, documented a number of ways she has been working with the federal government to protect Jews on campus and across America more generally.

Stern noted that President Donald Trump had signed an executive order last December prohibiting discrimination based on antisemitism, and she has worked to pass the Anti-Semitism Awareness Act, which would amend the Civil Rights Act of 1964 to give Jewish students the same constitutional protections as black, Hispanic, handicapped and other minority students.

While it passed the Senate, the bill has been stalled in the Democratic-controlled House of Representatives.

Noting that most Middle East departments on campuses are dominated by anti-Israel professors, Stern argued students are being misled.

“What students are receiving is paltry, one-sided propaganda, as a substitute for a well-rounded education,” Stern said.

All three panelists agreed that anti-Zionism is indistinguishable from antisemitism, even though the former is more acceptable on college campuses. Romirowsky noted that antisemitism is seen as racist, so opponents of Israel simply call themselves “anti-Zionist.”

Lewin noted, however that there is little distinction between antisemitism and opposition to Israel, as Jews and the land are “deeply intertwined.”

Stern ended the panel by calling antisemitism the “eternal rot in our society.”