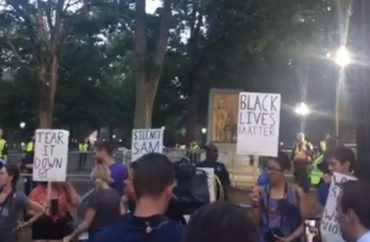 CHAPEL HILL, NC — Chants of “Cops and Klan go hand in hand,” “Who do you protect? Who do you serve?” and “No cops, no KKK, no fascist USA” echoed through UNC Chapel Hill’s McCorkle Place on Thursday night as a large and rowdy group of protesters converged to stand against talk of returning the recently toppled “Silent Sam” statue to its place on campus.

In contrast, a group of approximately 40 to 50 demonstrators with Confederate flags and holding signs that read “Save our monuments, preserve our history” also gathered to call for the reinstallation of the monument to the Confederate soldiers who lost their lives in the Civil War.

The pro-statue folks drew the ire of counter-protesters, the latter of whom were responsible for the lion’s share of yelling, dancing and chanting throughout the night. They numbered between 200 and 250.

Initially, the pro-statue group was limited to just two men, who the crowd mocked. The crowd of anti-statue protesters screamed at the men and accused them of being Nazis and racists. Police officers intervened to usher the men into the designated protest areas around the statue.

The pro-statue group then unveiled a large Confederate flag and took a group photo. For the most part, they did not interact with their counter-protesters.

The anti-Silent Sam crowd was divided into two halves. As one half jeered at the pro-statue demonstrators, the others danced along to loud music, as the protest was initially billed as a “Dance Party and Speakout.”

They yelled at the pro-statue crowd, calling out profanities and chanting “Black lives matter,” “Nazis go home” and “Fuck 12,” among other phrases.

The event carried on for approximately 90 minutes before police officers began to usher demonstrators away. The officers used their bicycles to form a cordon to separate the two sides.

Protesters affected by pepper spray provided differing accounts of who it was used on.

A video posted by the News & Observer shows police officers taking a woman into custody while using pepper spray.

According to a statement released after the incident by the Chapel Hill police, three arrests were made and no injuries occured. The statement does not mention the use of pepper spray.

A member of the UNC board of governors said recently that the statue, which had been previously torn down by protesters, would be put back up, but university officials have yet to make some sort of official announcement on the matter.

Watch The Fix’s Facebook livestream of the first hour of the event here.