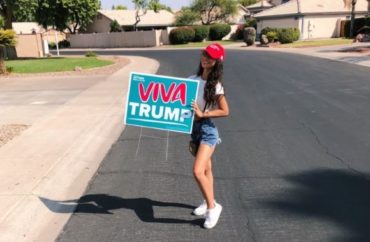 In an exclusive interview with The College Fix, she explains: ‘I’m tired of this’

A vocal supporter of President Donald Trump at Loyola Marymount University, who serves as its student government senator for diversity and inclusion, said she plans to resign her position even though she recently beat an impeachment attempt lodged against her.

Stephanie Martinez said she will step down from her Associated Students of Loyola Marymount University post, saying she does not think it’s possible to work successfully with the students who toiled throughout the fall semester to have her removed.

“I’m planning on resigning. I’m tired of this. I can’t work with them [the Associated Students of Loyola Marymount University],” Martinez told The College Fix. “Additionally, I have a vice-chair seat in the Republican National Hispanic Assembly for all of LA County. I’d much rather divert my focus to that.”

As previously reported by The Fix, the attempt to remove Martinez began late last spring after a progressive student news organization uncovered past tweets in which she voiced opposition to illegal immigration.

In October, the Associated Students of Loyola Marymount University Senate voted 18-1, with two abstains, in favor of Martinez’s impeachment for “conduct that severely damages the integrity or authority of ASLMU or the office held by the individual in question.”

On November 3, the ASLMU Judicial Board reversed the impeachment in a unanimous 5-0 decision, claiming evidence presented at the senate’s trial “did not meet sufficient grounds.”

However, the board did find Martinez guilty of “numerous” offensives, including a lack of “remorse for any anti-LGBTQ+ or any antiundocumented immigrant sentiments, or understanding of how they can potentially harm these communities.”

The board decided that in order for Martinez to maintain her position on ASLMU, she had to issue a public apology along with a 1,000-word research proposal on how she will serve LMU’s “LGBTQ+ and undocumented student communities.”

But in a surprising turn of events, the ASLMU Executive Branch on Monday announced these sanctions were “not permissible under the bylaws and cannot be enforced by any member of ASLMU.”

The statement noted that ASLMU’s attorney general has advised that the sanctions are not enforceable or permissible. It added Martinez has not completed any of the sanctions.

LMU’s student government vice president, Elsie Mares, issued a statement criticizing the Judicial Board for overturning the impeachment, while vowing to “begin transforming ASLMU into an institution that reflects a commitment to anti-racism.”

“Across ASLMU, several officers are committed to this end and look forward to being held accountable by our community to deliver real structural change,” Mares added.

Martinez said she is less than impressed.

“I feel extremely uncomfortable working with them. During the impeachment hearing their expression said it all,” she told The Fix, claiming she suspects that ASLMU senators will impeach her again if she remains in office.