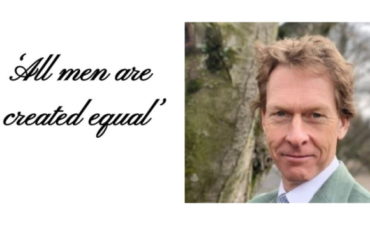 ‘I was blocked for quoting the Declaration of Independence’

A professor who was blocked on Twitter by a University of Oregon account after he tweeted “all men are created equal” at the account has filed a First Amendment lawsuit.

Portland State University Professor Bruce Gilley’s lawsuit names the campus administrator who blocked him as the defendant in the federal lawsuit, filed Aug. 11.

“Clearly it’s not that I need to read the University of Oregon’s Twitter account, but what is important is I need to make use of my role as a defender of academic freedom in higher education … to make sure government-funded universities comply with our Constitution,” Gilley said Friday in a telephone interview with The College Fix.

On June 14, UO’s Equity and Inclusion Twitter account tweeted “You can interrupt racism” with a wording prompt on how to start such a conversation: “It sounded like you just said [blank]. Is that what you really meant?”

In response, Gilley retweeted it with the statement “all men are created equal,” tagging both the University of Oregon and its Equity and Inclusion Twitter accounts.

The lawsuit alleges Tova Stabin, communication manager for the university’s Division of Equity and Inclusion, blocked Gilley as a result. 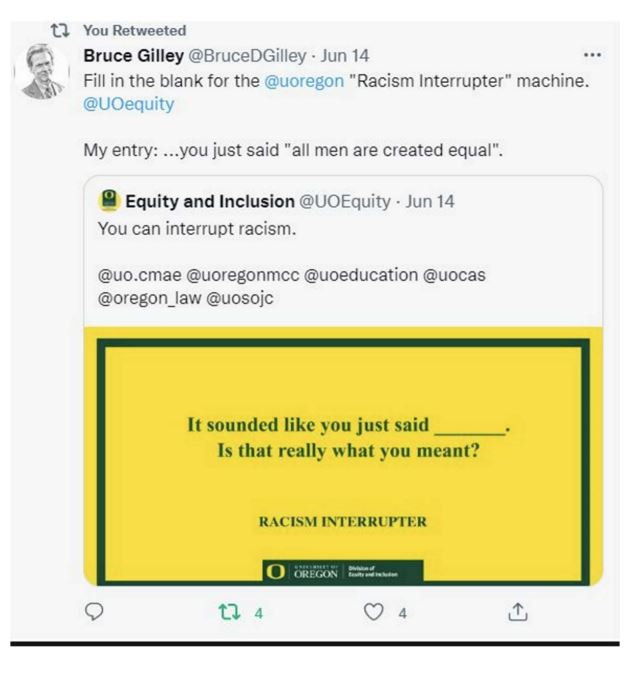 Stabin and University of Oregon media affairs did not respond to an emailed request for comment Friday from The College Fix.

“Blocking also removed Bruce Gilley’s ‘all men are created equal’ reply from @UOEquity’s timeline and prevented other users from viewing it or interacting with it, and with Gilley, including followers of the @UOEquity account,” the lawsuit states.

The suit claims the reason Stabin blocked Gilley is because “she and her employer disagree with the viewpoint … that ‘all men are created equal.'” It also alleges Stabin “believes that Prof. Gilley’s opinion is critical of her employer’s DEI ideology and she wishes to suppress his viewpoint.”

“On July 5, 2022, after Bruce Gilley filed a public records request for the policy utilized by [the Office of the Vice President for Equity and Inclusion] to block Twitter users, the University of Oregon informed him that there was no written policy and that the ‘staff member that administers the VPEI Twitter account and social media has the autonomy to manage the accounts and uses professional judgment when deciding to block users,” the lawsuit states.

Two other Twitter users expressing conservative viewpoints at the @UOEquity account have also been blocked, the lawsuit alleges.

Gilley is represented by the Institute for Free Speech, a nonpartisan First Amendment advocacy group, and the Angus Lee Law Firm.

“The First Amendment does not allow the government or its actors to ban individuals from public forums just because they disagree with the views those individuals express,” a news release from the institute states. “The lawsuit asks the judge to order @UOEquity to unblock Professor Gilley and to issue a permanent injunction preventing the account’s manager and agents from discriminating on the basis of viewpoint when blocking users in the future.”

Gilley told The College Fix on Friday that the request for a temporary restraining order has already been denied, but the effort for a permanent injunction is the long game. He described his case as “emerging jurisprudence.”

“I knew immediately that this was a clear-cut, made-in-heaven case, all the more so because I was blocked for quoting the Declaration of Independence,” he said. “This is the perfect case to establish a precedent that says if you are a public agency you can’t pick and choose who is a member of the public.”

He said the university cannot simply unblock him to make the lawsuit moot.

“The case goes forward even if they unblock me tomorrow,” he told The Fix, “because they could reblock me anytime and because … simply to unblock me would not show they had engaged in a change of their practices.”

Gilley is no stranger to controversy. In 2018 he was investigated, but eventually cleared, by his employers at Portland State after authoring a controversial article in defense of colonialism. His course on conservative political thought was also canceled by Portland State.

Earlier this month, Gilley’s latest book “In Defense of German Colonialism: And How Its Critics Empowered Nazis, Communists, and the Enemies of the West” was published.

MORE: They keep trying to cancel this conservative professor. He refuses to back down.